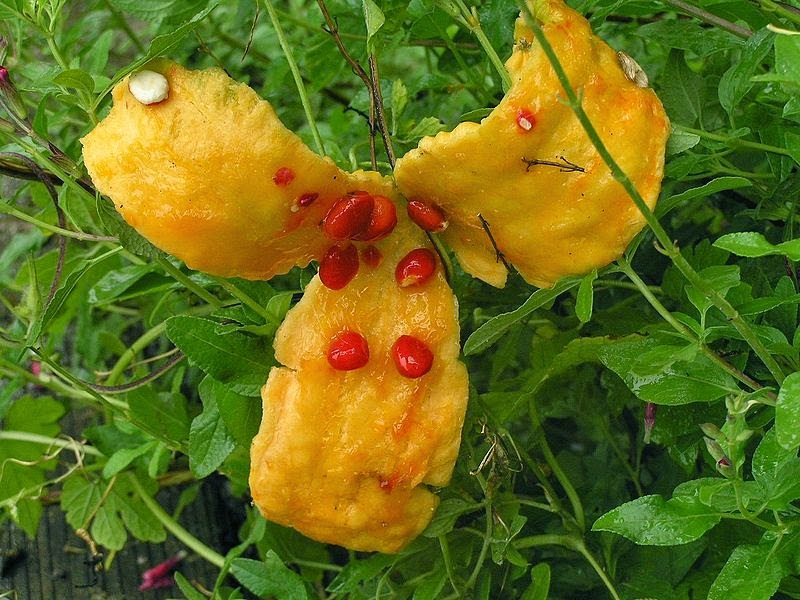 A tea made of the vine is used for diabetes, hypertension, worms, dysentery, malaria and as a general tonic and blood purifier. It is also very effective to relieve constipation and colds and fevers in children.
Women in Latin American use the leaf for menstrual problems to promote discharge after childbirth.

The tea is taken for 9 days after giving birth to clean out and tone up all the organs involved in the delivery. Cerasee is also used as a natural method of birth control, by taking two cups each day after intercourse, for three days. It is said that women who drink Cerasee daily will not conceive during that time.
As a wash, the tea is used externally for sores, rashes, skin ulcers and all skin problems. A Cerasee bath is good for arthritis, rheumatism, gout and other similar ailments. 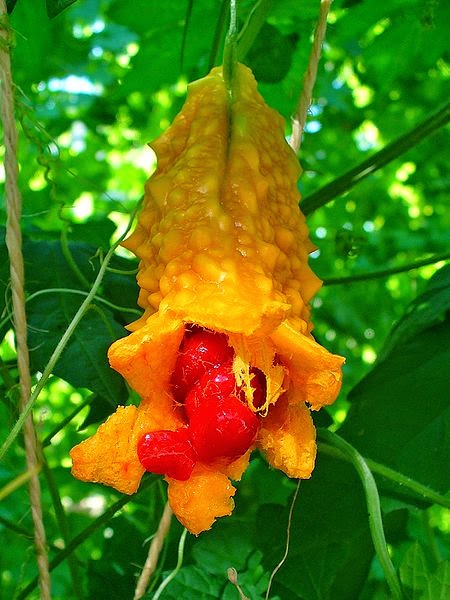 Cerasee comes in a variety of shapes and sizes.  The Cerasee more typical of India has a narrower shape with pointed ends, and a surface covered with jagged, triangular "teeth" and ridges. It is green to white in color. Some bear miniature fruit of only 6–10 cm in length, which may be served individually as stuffed vegetables. These miniature fruit are popular in India and elsewhere in Southeast Asia.

The flesh on the cerasee seeds are edible and sweet in taste. The pods found all over the cerasee vine, are first green, then turn orange when ripe. 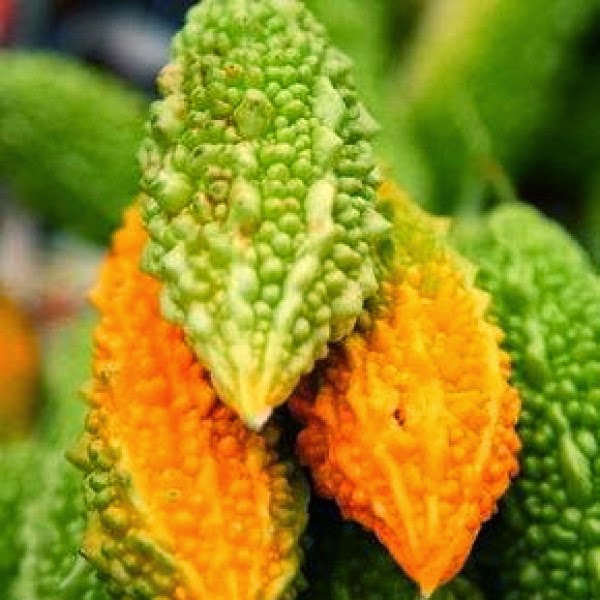 In Trinidad and Tobago, Cerasee are usually sautéed with onion, garlic and scotch bonnet pepper until almost crisp, while in Jamaica it is consumed exclusively by drinking.

Cerasee is a significant ingredient in Okinawan cuisine, and is increasingly used in mainland Japan. It is popularly credited with Okinawan life expectancies being higher than the already long Japanese ones.In the Philippines, Cerasee may be stir-fried with ground beef and oyster sauce, or with eggs and diced tomato. 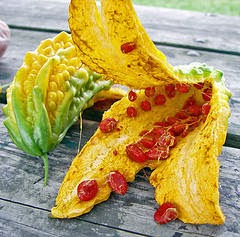 Cerasee can be consumed in two ways, sauteed or boiled, and drink as tea, or chilled, and serve as a refreshing drink. The young shoots and leaves of Cerasee may also be eaten as greens.Cerasee is often used in Chinese Cuisine for its bitter flavor, typically in stir-fries (often with pork and douchi), soups, and also as tea. It has also been used in place of hops as the bitter ingredient in some Chinese beers.It is very popular throughout South Asia. 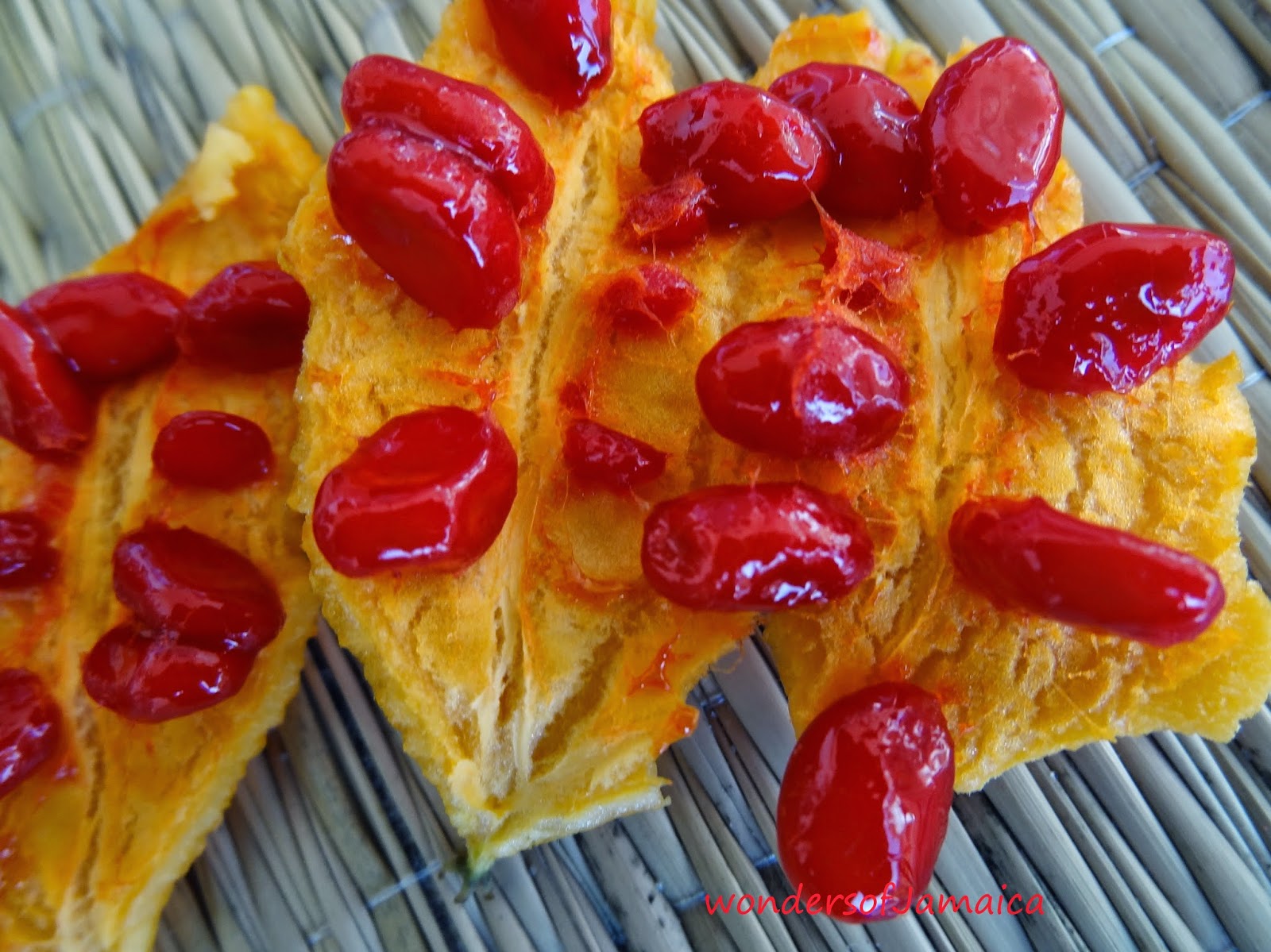 In Northern India, it is often prepared with potatoes and served with yogurt on the side to offset the bitterness, or used in sabji. In North Indian cuisine it is stuffed with spices and then cooked in oil. In Southern India it is used in the dishes thoran/thuvaran (mixed with grated coconut), theeyal (cooked with roasted coconut) and pachadi (which is considered a medicinal food for diabetics).

Other popular recipes include preparations with curry, deep fried with peanuts or other ground nuts, and pachi pulusu, a soup with fried onions and other spices.

In Tamil Nadu a special preparation in Brahmins' cuisine called 'pagarkai pitla' is a kind of sour 'Koottu' , variety is very popular. Also popular is ' kattu a curry stuffed with onions,cooked lentil and grated coconut mix, tied with thread and fried in oil.

In Pakistan and Bangladesh, Cerasee is often cooked with onions, red chili powder, turmeric powder, salt, coriander powder, and a pinch of cumin seeds. Another dish in Pakistan calls for whole, unpeeled Cerasee to be boiled, and then stuffed with cooked ground beef, served with either hot tandoori bread, naan, chappati, or with khichri (a mixture of lentils and rice).

Cerasee is widely grown in Asia, Africa, and the Caribbean for its edible fruit, and drink, is among the bitterest of all fruits. Cerasee is very common here in Central Florida, but very few people really know the value of this very important herb. This herb may hold the key to a lot of the health problems we face. 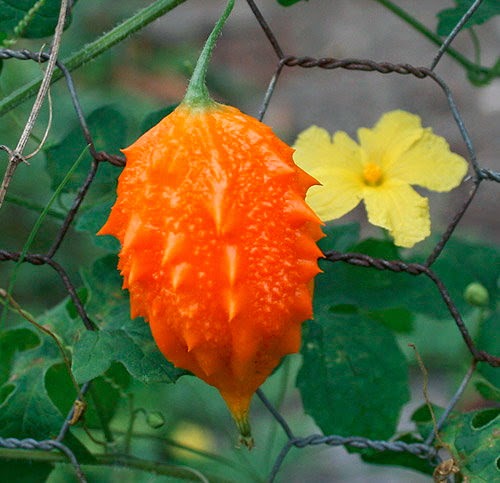 Today folks in the Caribbean still use cerasee as a blood cleanser; bush bath for beautiful skin; and for diabetes, cancer and other infectious diseases. We also use it for all types of stomach complaints including griping or pain in the stomach, amoebas and intestinal parasites and as a laxative. Research confirms these benefits by documenting the anti-bacterial and anti-parasitic properties within cerasee.

Cerasee has been used in various Asian and African traditional medicine systems for a long time. In Turkey it has been used as a folk remedy for a variety of ailments, particularly stomach complaints. The fruit is broken up and soaked in either olive oil or honey.The plant contains several biologically active compounds, chiefly momordicin I and II, and cucurbitacin B. 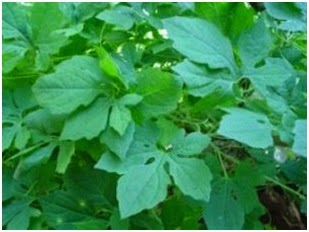 Diabetes:
In 1962, Lolitkar and Rao extracted from the plant a substance, which they called charantin, which had hypoglycaemic effect on normal and diabetic rabbits. Another principle, active only on diabetic rabbits, was isolated by Visarata and Ungsurungsie in 1981. Cerasee has been found to increase insulin sensitivity. In 2007, a study by the Philippine Department of Health determined that a daily dose of 100 mg per kilogram of body weight is comparable to 2.5 mg/kg of the anti-diabetes drug glibenclamide taken twice per day. Tablets of Bitter Melon extract are sold in the Philippines as a food supplement and exported to many countries.Other compounds in Cerasee have been found to activate the AMPK, the protein that regulates glucose uptake (a process which is impaired in diabetics).

Cerasee also contains a lectin that has insulin-like activity due to its non-protein-specific linking together to insulin receptors. This lectin lowers blood glucose concentrations by acting on peripheral tissues and, similar to insulin's effects in the brain, suppressing appetite. This lectin is likely a major contributor to the hypoglycemic effect that develops after eating Bitter Melon. 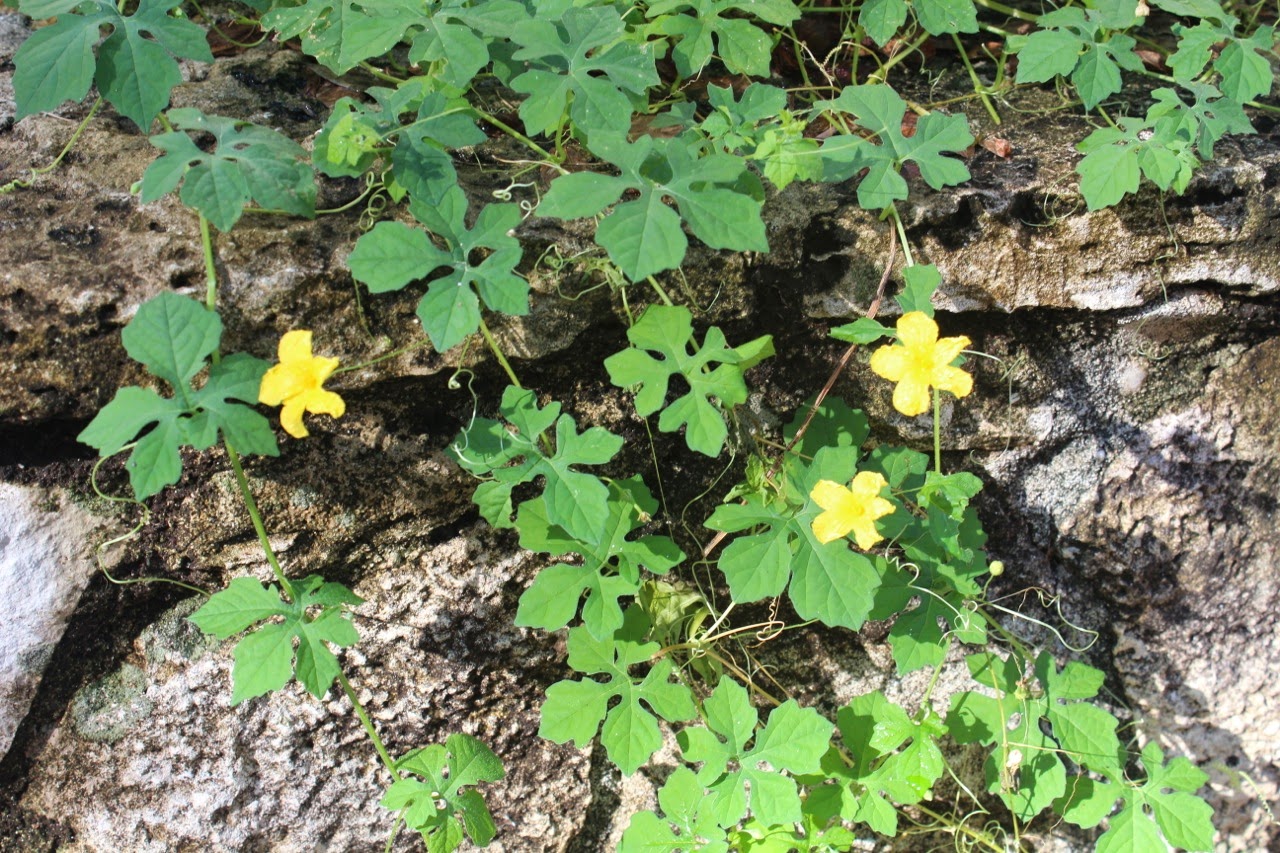 Cerasee is traditionally regarded in Asia as useful for preventing and treating malaria. Tea from its leaves is used for this purpose also in Panama and Colombia. In Guyana, Cerasee are boiled and stir-fried with garlic and onions. This popular side dish known as corilla is served to prevent malaria. Laboratory studies have confirmed that species related to Cerasee have anti-malarial activity, though human studies have not yet been published.
Anti Cancer:
Researchers at Saint Louis University claims that an extract from Cerasee, commonly eaten and known as karela in India, causes a chain of events which helps to kill breast cancer cells and prevents them from multiplying.
Cerasee has been used in traditional medicine for several other ailments, including dysentery, colic, fevers, burns, painful menstruation, scabies and other skin problems. It has also been used as abortifacient, (no ideas please) for birth control, and to help childbirth.

In Togo the plant is traditionally used against viral diseases such as chickenpox and measles. Tests with leaf extracts have shown in vitro activity against the herpes simplex type 1 virus, apparently due to unidentified compounds other than the momordicins.

Laboratory tests suggest that compounds in Cerasee might be effective for treating HIV infection. As most compounds isolated from Cerasee that impact HIV have either been proteins or lectins, neither of which are well-absorbed, it is unlikely that oral intake of Cerasee will slow HIV in infected people. It is possible oral ingestion of Cerasee could offset negative effects of anti-HIV drugs, if a test tube study can be shown to be applicable to people. 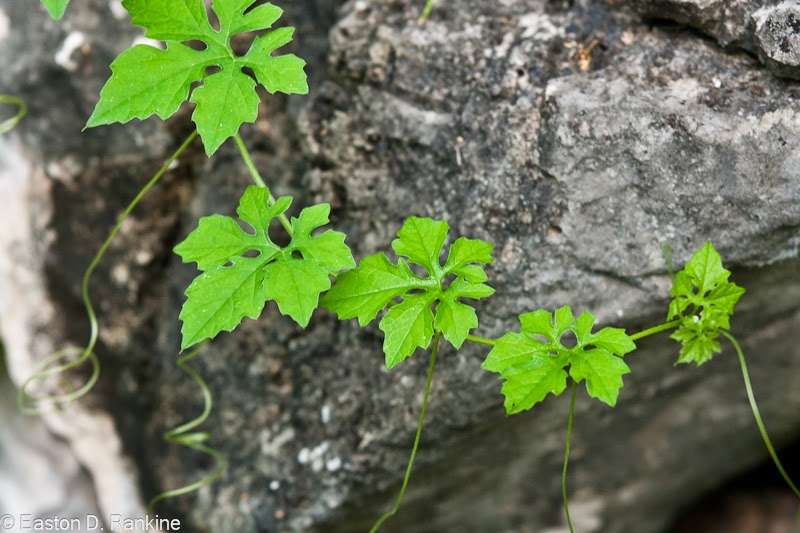 Studies in mice indicate that Cerasee seed may have a cardio protective effect by down-regulating the NF-κB inflammatory pathway.
Cerasee has been used in traditional medicine for several other ailments, including dysentery, colic, fevers, burns, painful menstruation, scabies and other skin problems. It has also been used as abortifacient, for birth control, and to help childbirth.

Propagated by cuttings, which, is planted on a bed on light earth, during any of the summer months.

Posted by Liliana Usvat at 1:19 PM