Tenochtitlan was a garden city, and the Aztecs/Mexica, in Jacques Soustelle’s words ‘had a positive passion for flowers’. This may hardly be surprising given that 1 in 10 of all the 250,000 species of plants in the world are found in Mexico - and half of these are ‘endemic’ to the country (only to be found in Mexico).

The importance of flowers in ancient Mexico, representing as they did life, death, gods, creation, humans, language, song and art, friendship, stateliness, warrior captives, war itself, sky, earth... and an important calendar sign. Flowers accompanied humans from conception and birth to death and burial: clearly the flower was ‘one of the basic elements in the art of pre-Hispanic language - like the quetzal feather and the jade bead, it was the essence of something “precious”.

’The name for garden in general was xochitla, literally flower place; a variant being xoxochitla, a place of many flowers. A walled garden was xochitepanyo. The pleasure garden of the ruling class was designated as xochitecpancalli, the palace of flowers. The humble garden of the Indian was and is a xochichinancalli, flower place enclosed by a fence made of cane or reeds.’

Creating and developing a garden was a well respected pastime for the Aztec/Mexica élite, highly organised with teams of professional gardeners - who linked their expert knowledge of plants to the sacred calendar - and made possible by the accumulated wealth of the Aztec state. Writing of one of the many palaces that so astounded the Spanish with its beauty, Susan Toby Evans explains some of the ‘nitty-gritty’ behind the scenes:
Labour crews performing tribute obligations built the place, dug the ponds, plastered them, brought the stone and timbers and plants - all of this magnificence was paid for by the Aztec empire. And the design... reveals how Aztec [rulers] were kept in contact with affairs of state - canals brought canoes directly to the palaces... just as limousines and helicopters today ferry executive officers of business and government from one important meeting to another.

So highly developed and regulated was the art of gardening that strict laws preventing commoners from growing (or picking) certain flowers helped the nobility to display their rank and privileges in a direct (and colourful) way...

It’s a sad fact today that not a single Aztec garden plan remains, and we’re left, ironically, with the - in some cases quite detailed - descriptions written by the Spanish conquerors before they ravaged what must have been a truly beautiful landscape.

Moctezuma II kept three pleasure gardens - at his Tenochtitlan palace, as part of the cypress park and hanging gardens at Chapultepec, and at Iztapalapa. In his second letter to Charles V, in 1520, Cortés described the palace garden of Cuitlahuac (Moctezuma’s brother) at Iztapalapa in glowing terms:-

There are... very refreshing gardens with many trees and sweet-scented flowers, bathing places of fresh water, well constructed and having steps leading down to the bottom. [There was also] a large orchard near the house overlooked by a high terrace with many beautiful corridors and rooms. Within the orchard is a great square pool of fresh water, very well constructed, with sides of handsome masonry, around which runs a walk with a well-laid pavement of tiles, so wide that four persons can walk abreast on it, and 400 paces square, making in all 1,600 paces. On the other side of this promenade toward the wall of the garden are hedges of lattice work made of cane, behind which are all sorts of plantations of trees and aromatic herbs. The pool contains many fish and different kinds of waterfowl.

The hilltop gardens of the poet-king Netzahualcóyotl of Texcoco at Tetzcotzinco proved legendary, and were later to inspire the not-to-be-outdone Mexica ruler Moctezuma I to create the ‘botanical’ gardens at Huaxtepec. The native chronicler Ixtlilxochitl (himself descended from Netzahualcóyotl) gave a rich description . 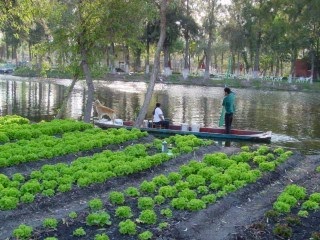 These parks and gardens were adorned with rich and sumptuously ornamented alcazars (summerhouses) with their fountains, their irrigation channels, their canals, their lakes and their bathing-places and wonderful mazes, where he had had a great variety of flowers planted and trees of all kinds, foreign and brought from distant parts... and the water intended for the fountains, pools and channels for watering the flowers and trees in this park came from its spring: to bring it, it had been necessary to build strong, high, cemented walls of unbelievable size, going from one mountain to the other with an aqueduct on top which came out at the highest part of the park.

Whenever the ruler claimed special (rare) plants in tribute, they were brought to the Aztec capital ‘in great quantities, with the earth still about the roots, wrapped in fine cloth’ - along with specialists in their upkeep - and were then ‘taken to Huaxtepec and planted around the springs’, according to the Spanish chronicler Diego Durán. The plantings were accompanied by ritual ceremonies that included bloodletting and the sacrifice of large numbers of quail to Xochiquetzal, the Mexica flower deity


By the time the Spanish came on the scene, the gardens had spread over 7 miles in circumference and held some 2,000 species of herbs, shrubs and trees. Cortés claimed these were the ‘finest, pleasantest and largest’ gardens he had ever seen:- 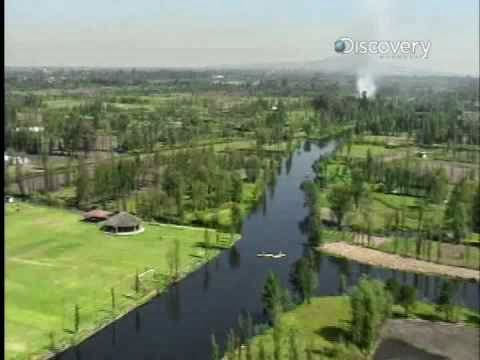 A very pretty rivulet [stream] with high banks ran through it from one end to the other. For the distance of two shots from a crossbow there were arbors [shady spots] and refreshing gardens and an infinite number of different kinds of fruit trees; many herbs and sweet-scented flowers. It certainly filled one with admiration to see the grandeur and exquisite beauty of this entire orchard.

All this was more than just an exotic display of conspicuous consumption: the medicinal plants grown at Huaxtepec were key to a huge trade in what today we might call ‘health products’ (follow the ‘Four Hundred Flowers’ link below to our Aztec Health section) - an Aztec industry whose importance was recognised by the Spanish: Huaxtepec was visited by the great natural historian Francisco Hernández, sent by the Spanish king to document the resources and to obtain valuable plants. 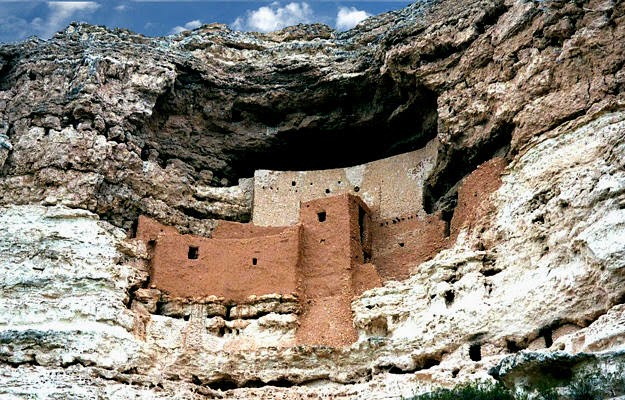 Several great historians, including William Prescott and Francisco del Paso y Troncoso, have claimed that the Aztecs developed the world’s first botanical gardens or ‘places designed to display an encyclopedic array of plants’ (Toby Evans). It remains highly likely that Europe’s earliest botanical gardens, created in Italy in the 1540s, were inspired by the great Mexica pleasure gardens that blew the Spanish away with their beauty... 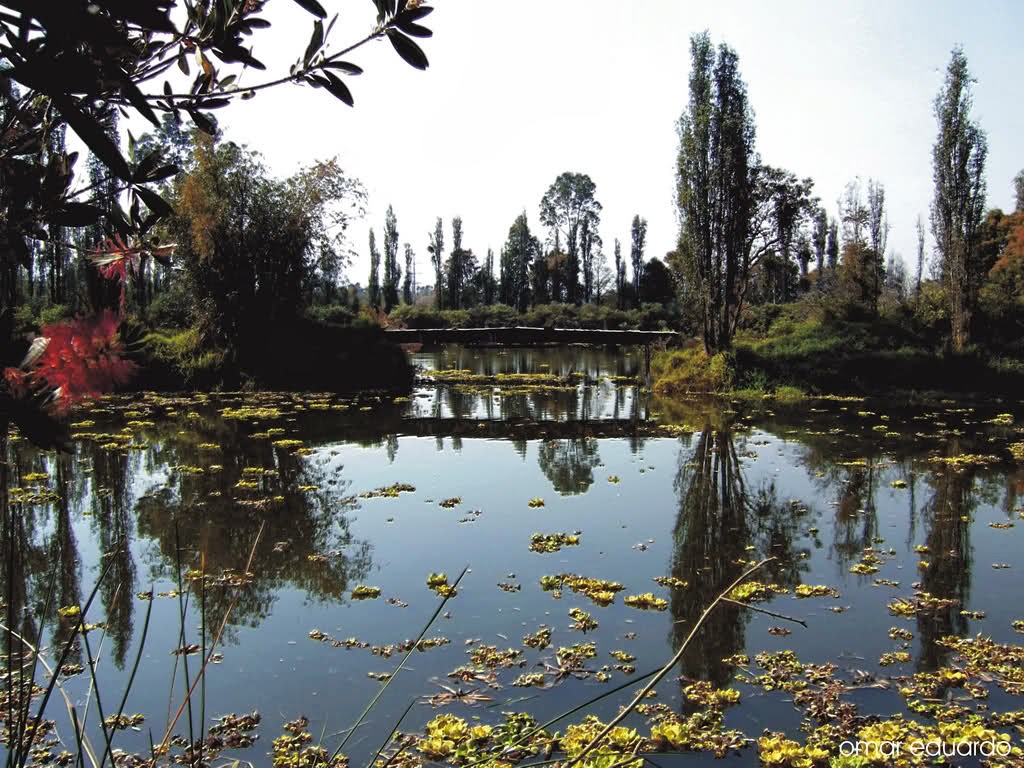 The Aztecs had developed a highly sophisticated system of medicine, in which these medicinal and useful herbs played a vital part (Burns and Arroo 2005). We know this because, in the wake of the Conquistadors, scholars travelled to the Americas to record the knowledge of the indigenous people in the form of codices and other documents. We can also see traces of traditional uses of herbs in the contemporary use of medicinal plants by Mexican communities.

The codices - Medicinal Uses of Plants

Of the surviving post-Conquest documents, one of the most attractive is probably the Libellus de Medicinalibus Indorum Herbis – also known variously as the Aztec Herbal, the Badianus Manuscript, or the Codex Barberini (de la Cruz 2000). It was written in 1552 by a young Aztec doctor, Martin de la Cruz “taught by no formal reasonings, but educated by experiments only”, and describes a number of ailments suffered by the Aztec people, together with their recommended treatments – some of which seem a little bizarre, it must be said.
A more detailed study is found in Friar Sahagún’s 16th Century General History of the Things of New Spain(de Sahagun 1963). This treatise of Aztec daily life – known as the Florentine Codex – contains a book titled “Earthly Things”, of which a large section is devoted to the medicinal herbs. Sahagúns’ text is considered to present a more authentic picture of genuine Aztec medicine than de la Cruz’ Aztec Herbal, because the latter had perhaps been “contaminated” by Spanish influences. We also have Hernandez’ Rerum Medicarum Novae Hispaniae Thesaurus, covering over a thousand medicinal plants, and described in detail in Professor Ortiz de Montallano’s introduction to this section.

Together, these documents describe a number of plants that are well known to us today as foodstuffs – vanilla, tomato, and guava, for example – and others that we know as ornamental flowers, such as types of magnolia and frangipani. The books give us botanical descriptions of the plants, details of how the Aztecs prepared them, and tell us which ailments were treated with them. 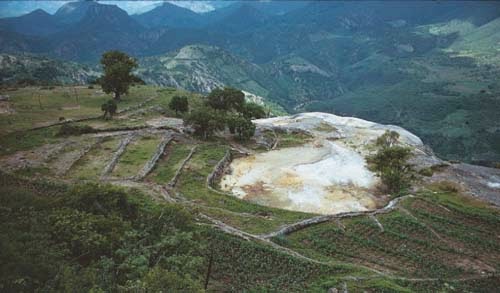 Hot and cold
Like Europeans of the time, Aztecs believed that plants were “hot” or “cold”, and could be used to correct excess heat or cold in the body. Excess cold in the body was concomitant with the retention of water, and cold/watery illnesses like gout ( coacihuiztli, which literally translates as “the stiffening of the serpent”) would be remedied with the application of a hot herb. 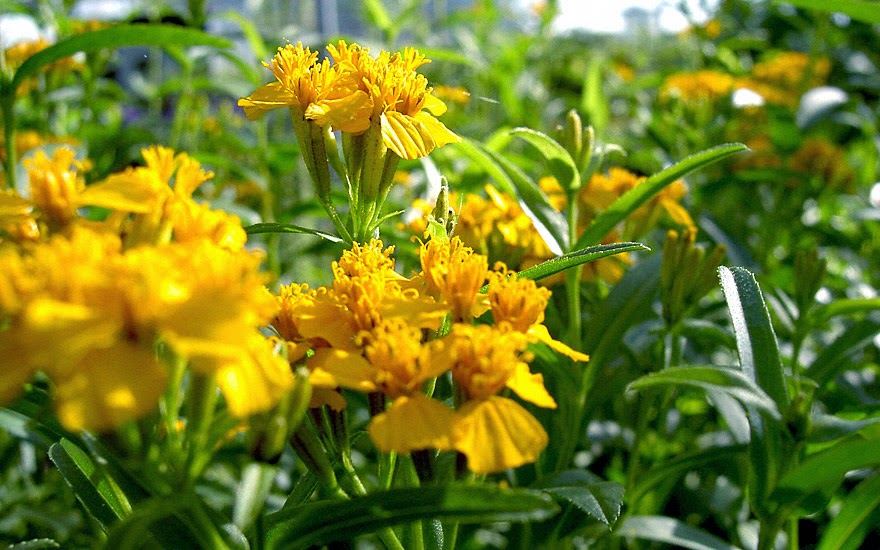 (Yauhtli)
Interestingly, many of the hot herbs, such as yauhtli (Tagetes lucida), act as diuretics, removing excess water from the body. Yauhtli was frequently used together with the hot herb iztauhyatl (Artemisia mexicana) 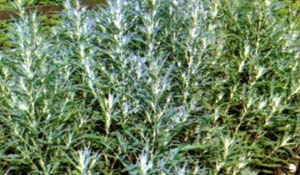 , the leaves of which were ground in water and drunk. Conversely the root of the Tlalmizquitl (Prosopis juliflora, the mesquite tree) 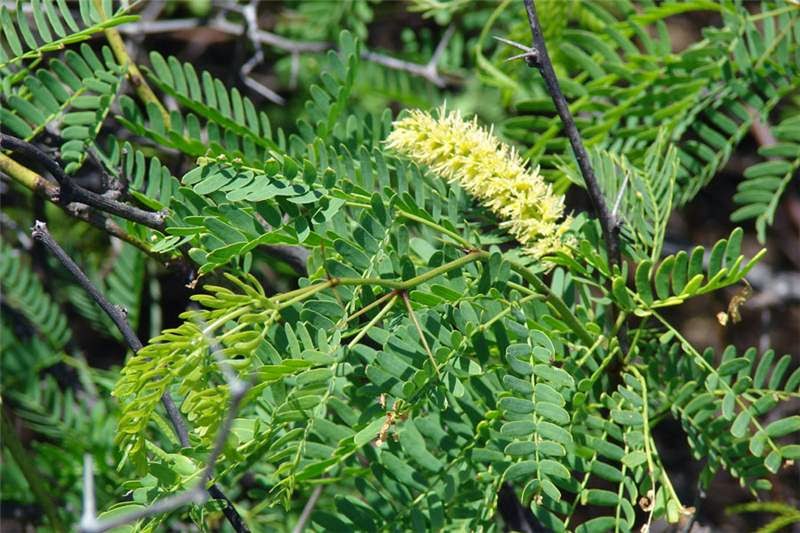 is “required by him whose body is very hot...it is the proper drink to cool his body”.

Sweet-smelling flowers – the Aztec word for flower is ‘xochitl’ - were considered to be medicinal. De la Cruz describes an attractive remedy for the relief of fatigue, requiring eloxochitl (Magnolia dealbata), 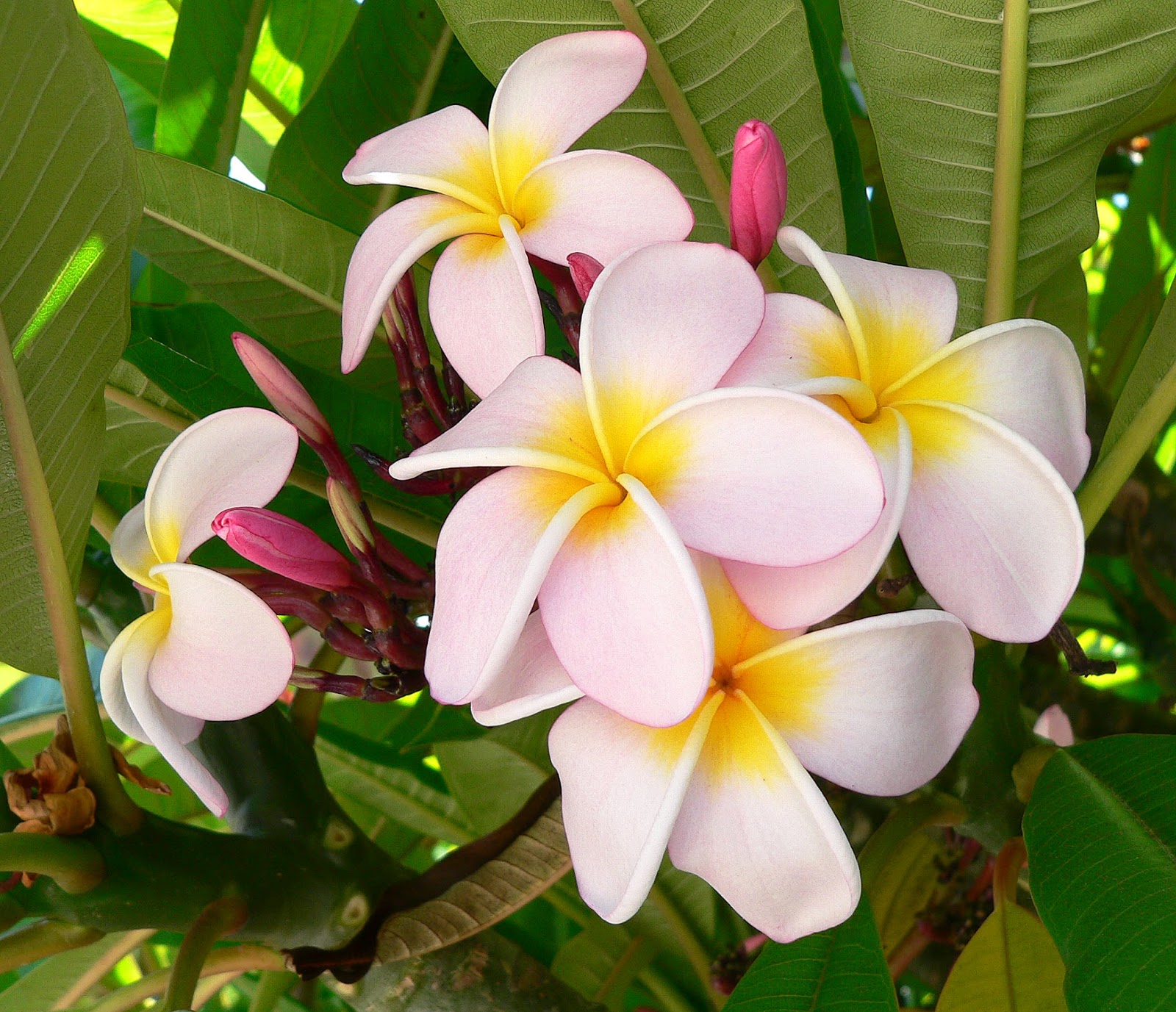 (Plumeria mexicana),
a frangipani described as being of “exceeding beauty”) and mecaxochitl(Vanilla planifolia). 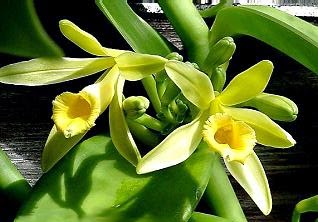 mecaxochitl(Vanilla planifolia)
Together with a few other “sweet summer flowers”, a fragrant water is made which will give “gladiatorial strength to the body” of the patient who bathes in it. 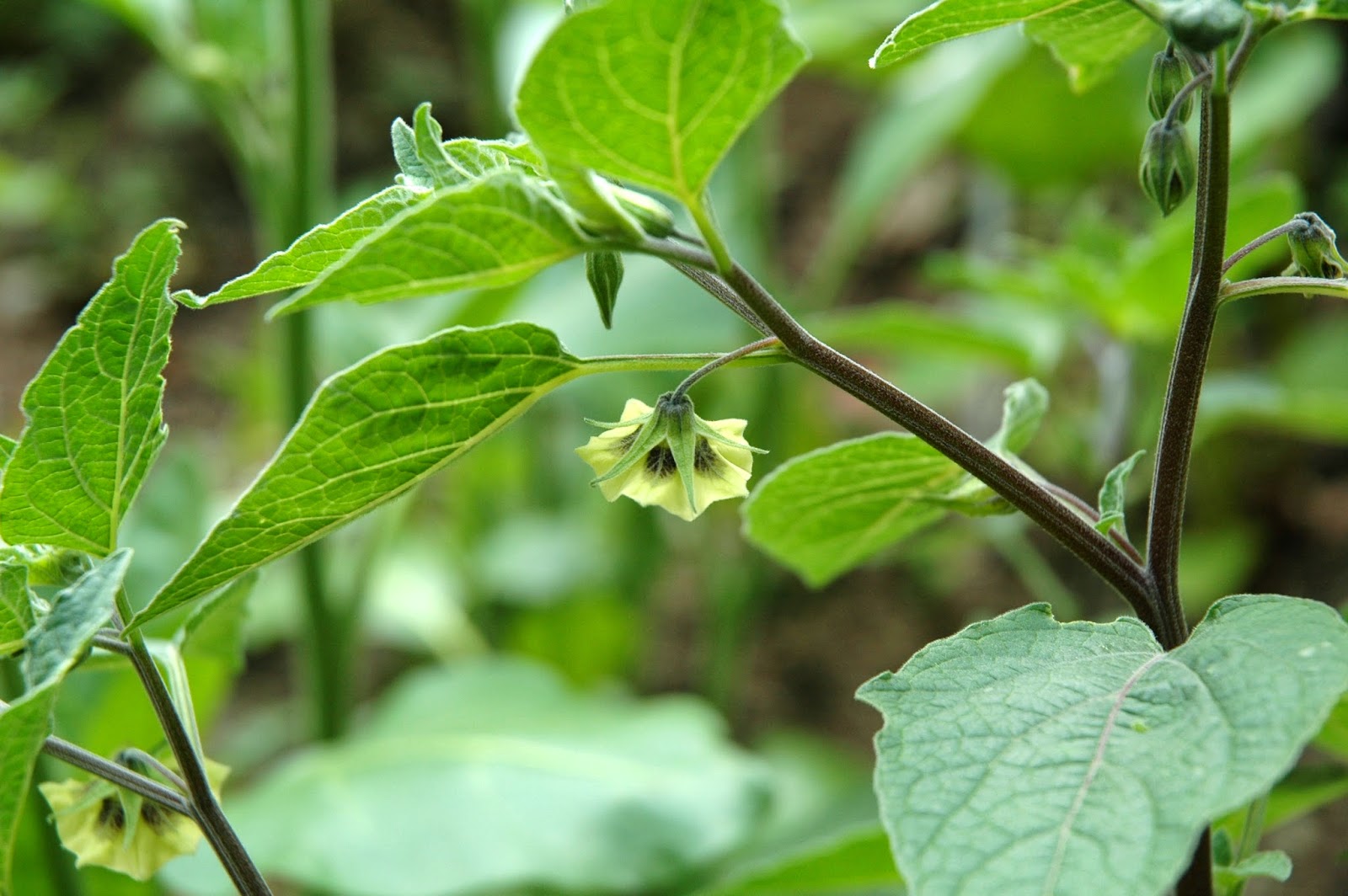 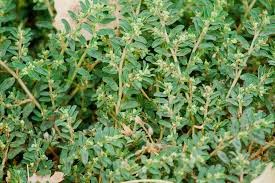 good for “one whose abdomen goes resounding”; and the cococxiuitl (Bocconia frutescens), 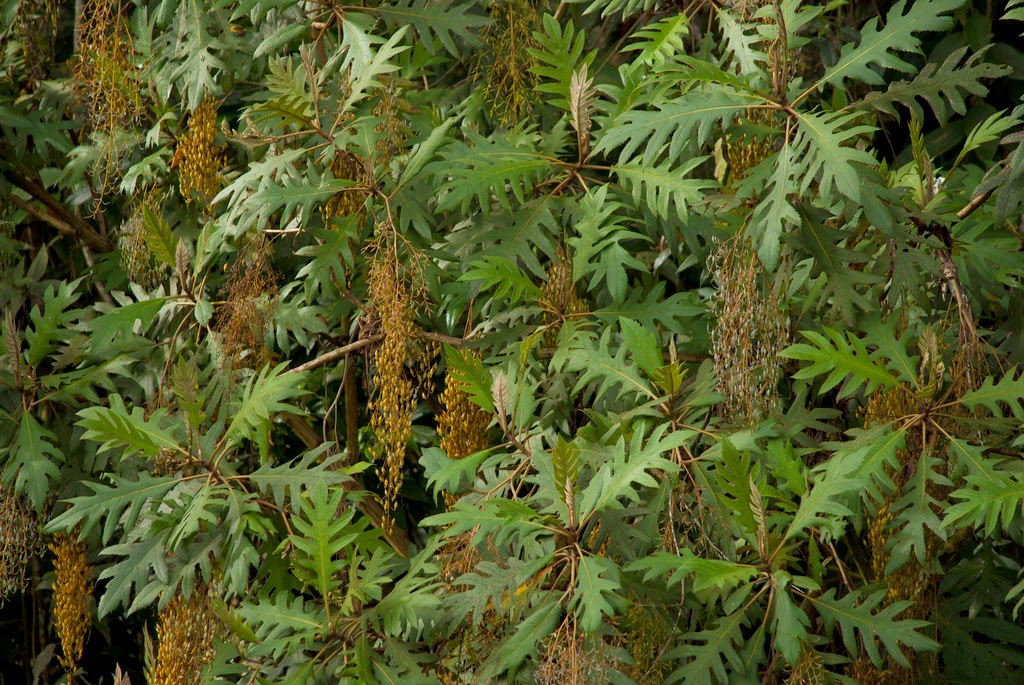 used for constipation. Apparently the latter cannot be eaten or drunk, but must be inserted in, shall we say, the other end of the alimentary canal. Sahagún’s informant warned, “It burns like chilli”. Fortunately he added that “not much is required”, for which the patient must have been grateful. 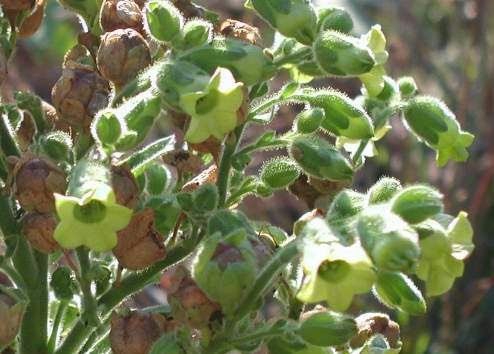 – also good for relieving tiredness.
Respiratory illnesses don’t appear all that frequently in the Aztec literature, but recommended for a chesty cough is the Tlaquequetzal (Achillea millefolium, or yarrow). 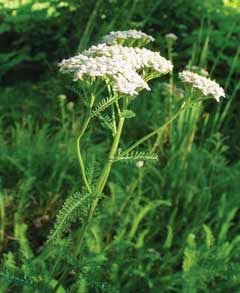 The activities of the Aztec warriors kept the healers busy. For “him who is pierced by an arrow”, the leaves and bark of the waxy chapolxiuitl (Pedilanthus pavonis) 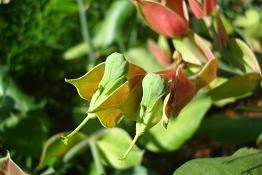 are applied to the wound, as it a preparation of zayolitzcan (Buddleia americana). 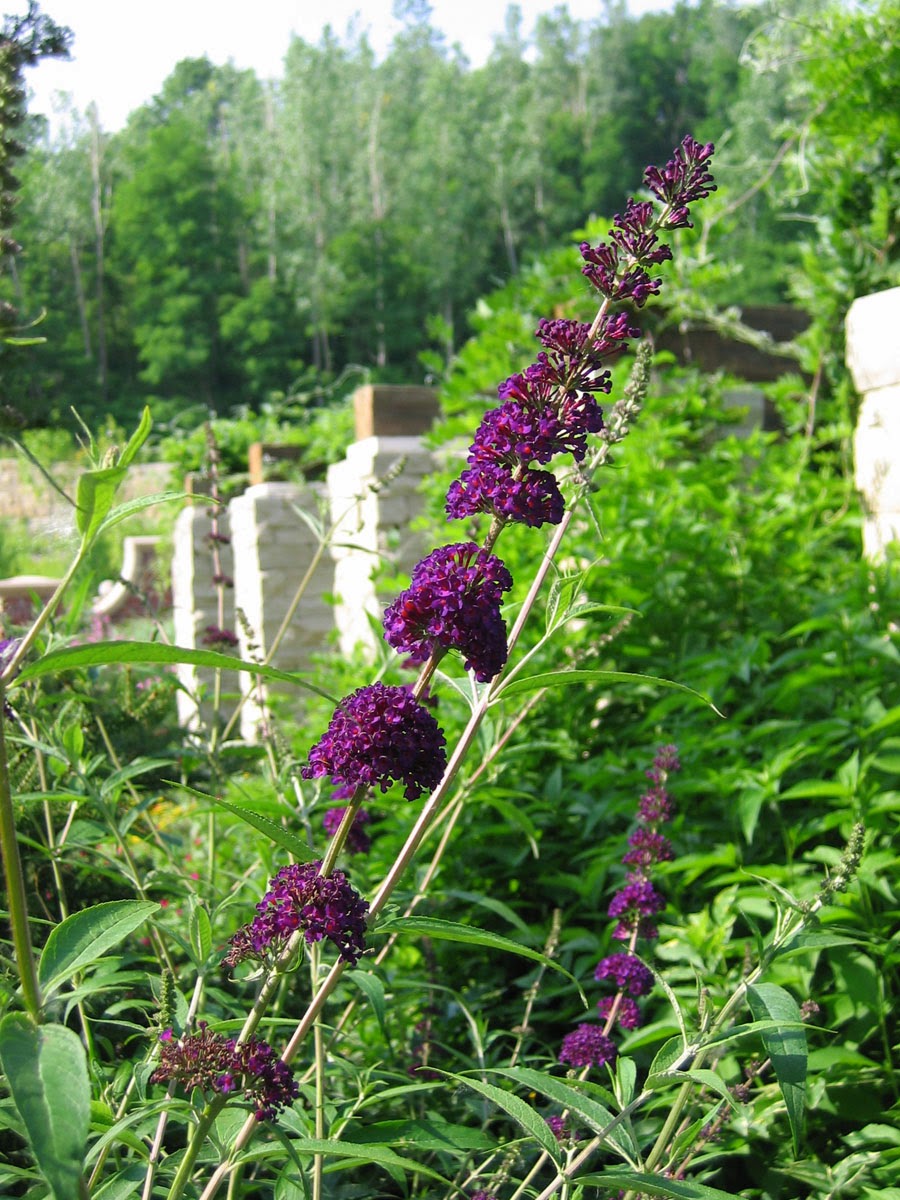 Buddleja americana
The combination of agave sap and salt is a very regular occurrence in wound remedies - agave sap, when mixed with salt, forms a solution that kills bacteria by dehydrating them.

Need a tonic? Try this recipe. Take the sap of the yellow-leafed maguey (Agave atrovirens), and cook it together with some yellow chilli and tomato juice, and ten gourd seeds. Take after eating.

After that you may need some Aztec toothpaste. Take the root of the tlatlauhcapatli (Geranium carolinianum),

together with some salt and chilli, and make a paste. Rub the paste into your teeth, if you dare.

And for a mouthwash, try an infusion of iztauhyatl (Artemisia mexicana).

Posted by Liliana Usvat at 1:04 PM

I really enjoy your blog .
http://herbalplantslanka.blogspot.com/