Let's plant one flower at a time one Bush at a time, One tree at a time. 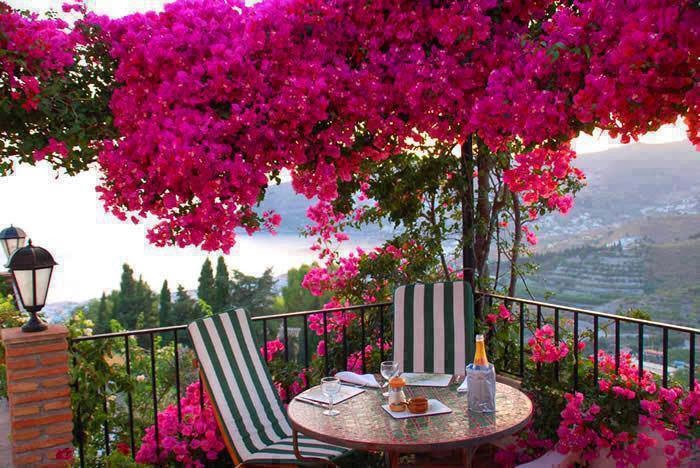 The bougainvillea is one of plants that you can use in your desert yard that is easy to grow, easy to care for, and looks good all year long. 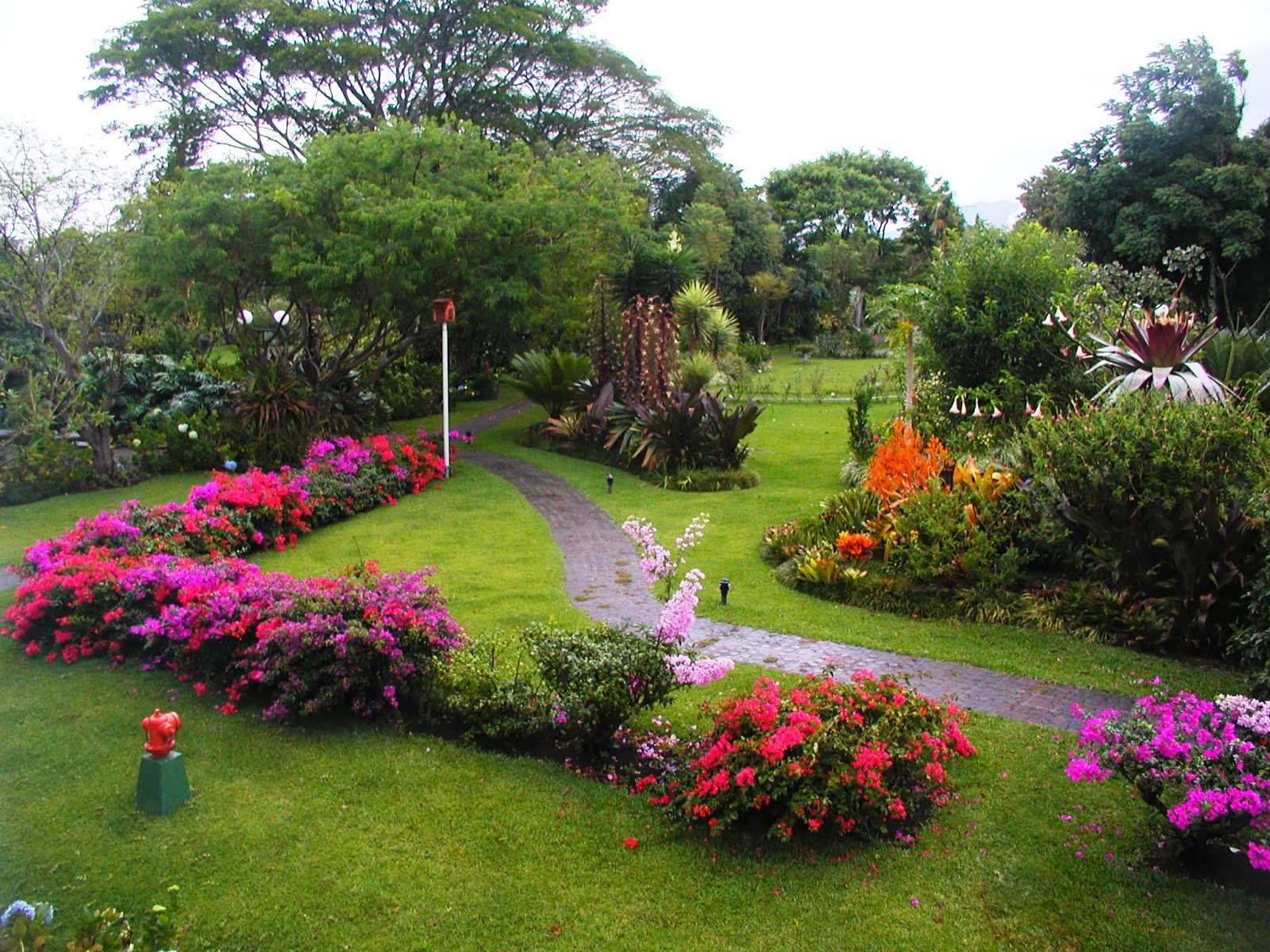 Bougainvilleas are a tropical and subtropical colorful vine. They are thorny, evergreen and some are fragrant. Bougainvilleas are popular for their large, colorful “blooms” which are produced most profusely in the summer. Like the dogwood and the poinsettia, their colorful “petals” are really bracts (modified leaves.) 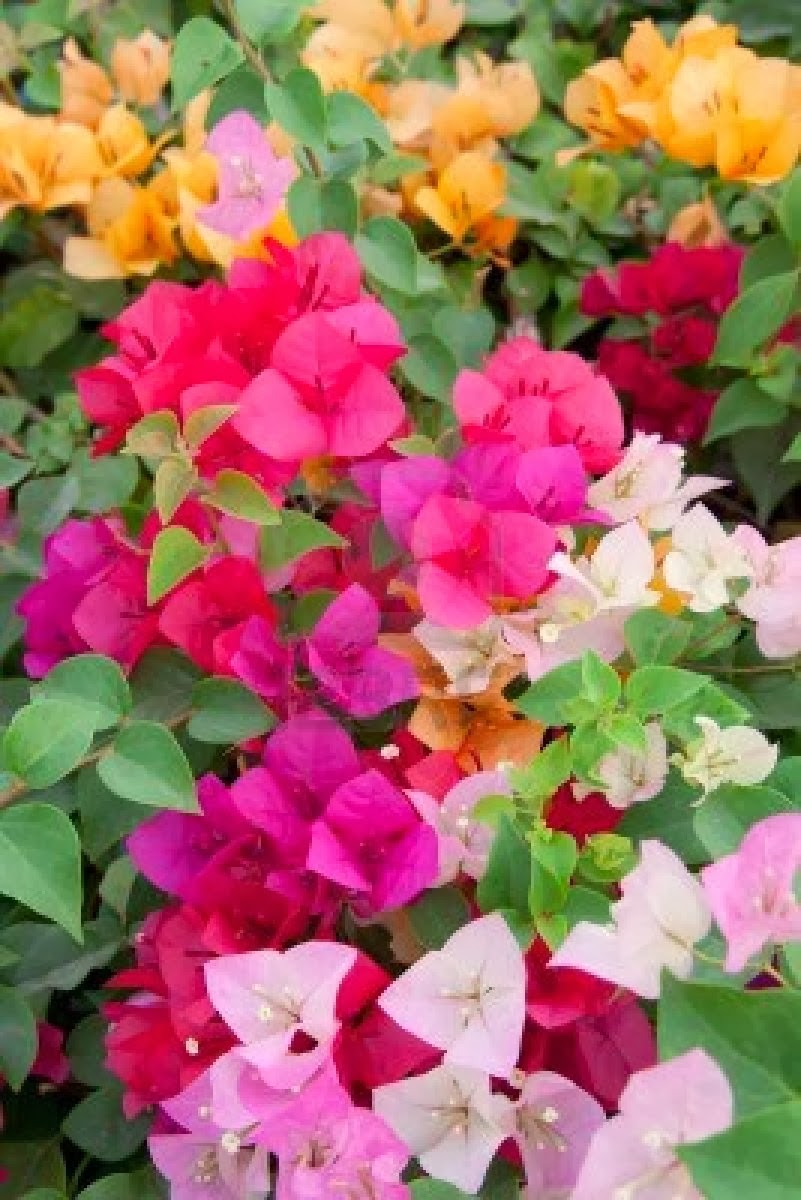 The first European to describe these plants was Philibert Commerçon, a botanist accompanying French Navy admiral and explorer Louis Antoine de Bougainville during his voyage of circumnavigation, and first published for him by Antoine Laurent de Jussieu in 1789. 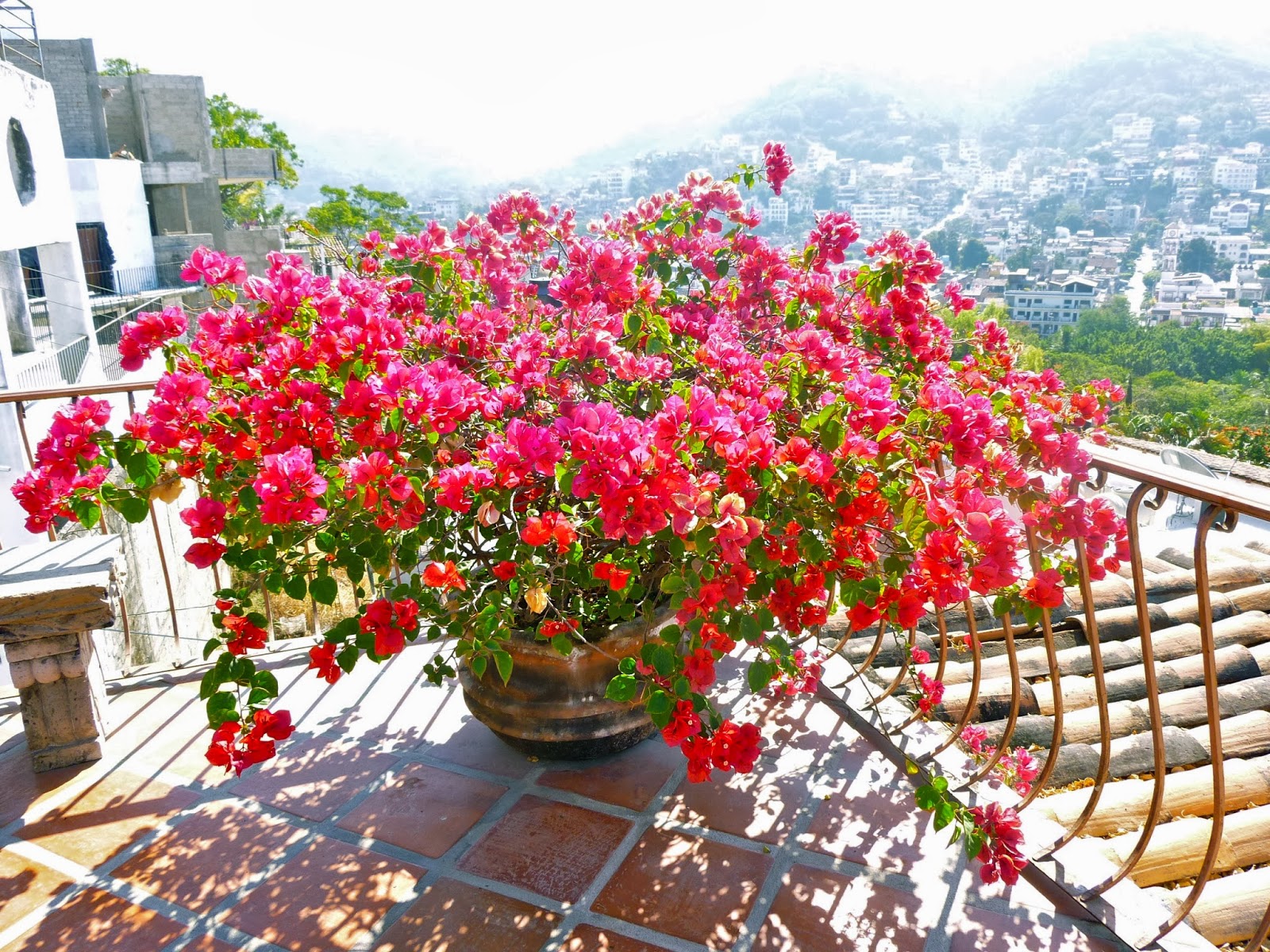 It is possible that the first European to observe these plants was Jeanne Baré, Commerçon's lover and assistant whom he sneaked on board (despite regulations) disguised as a man (and who thus became the first woman to circumnavigate the globe). 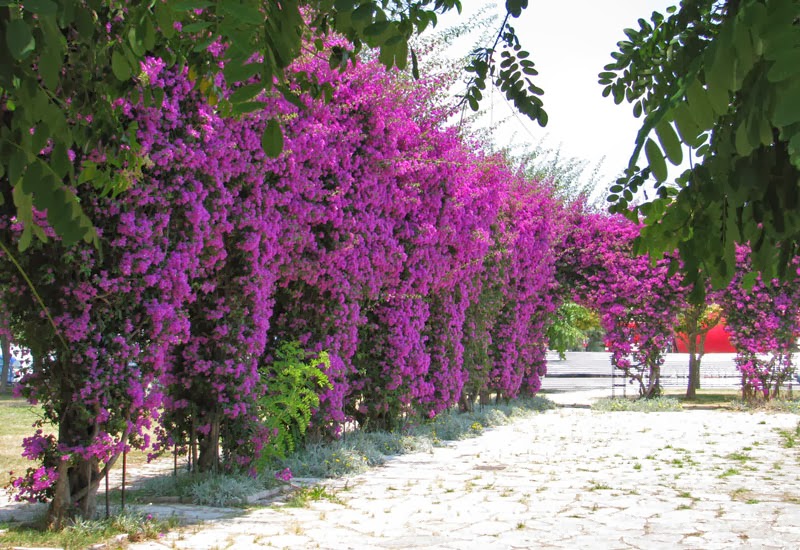 Bougainvilleas are popular ornamental plants in most areas with warm climates. Locarno in Switzerland, with its mild Mediterranean climate, is famous for its bougainvilleas. 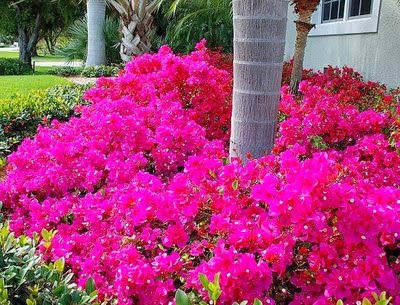 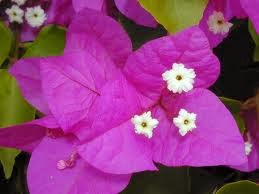 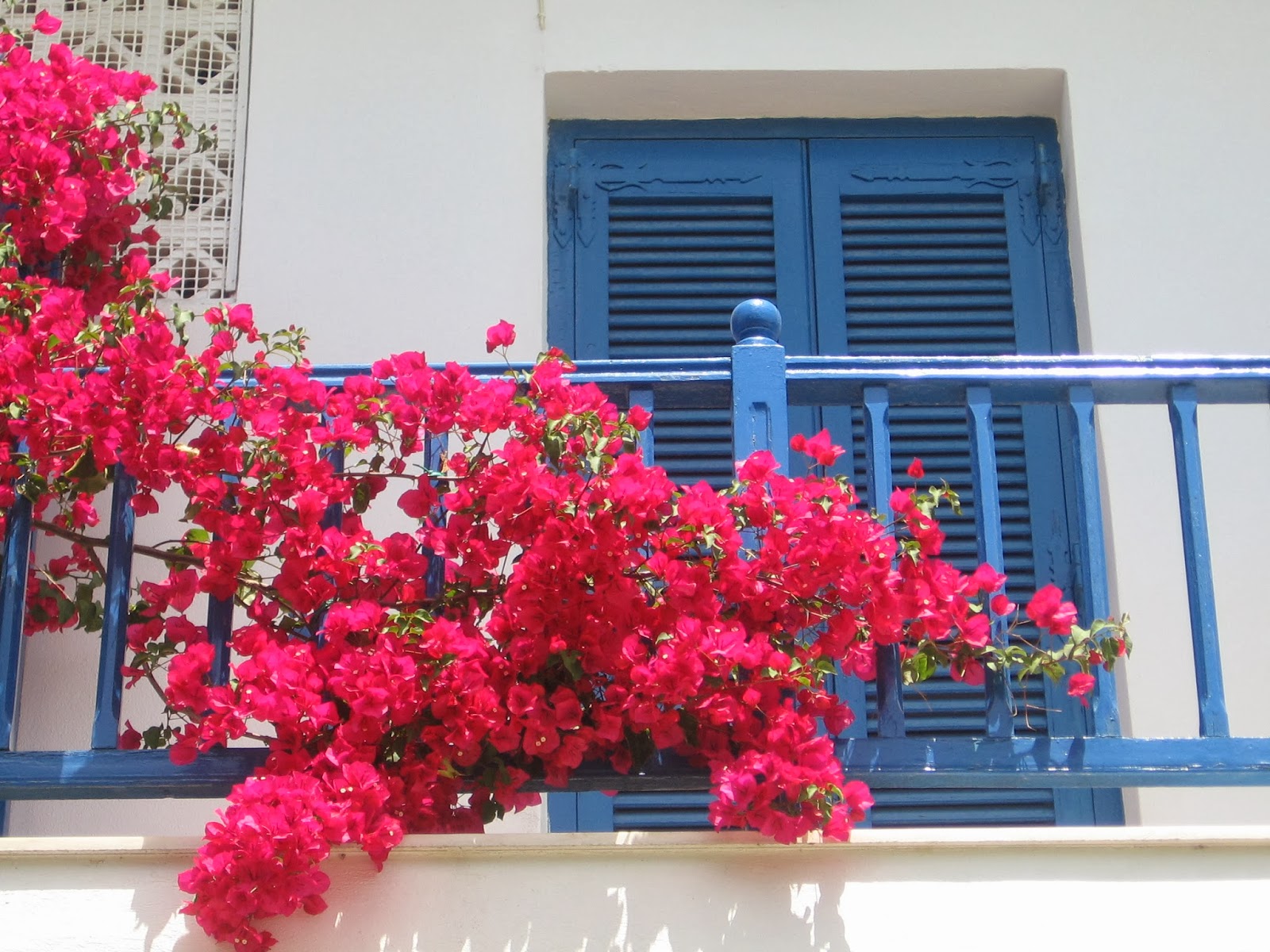 Bougainvillea are evergreen desert woody vines that flower several times throughout the year. The most common colors of bougainvillea that you'll see in the Phoenix area are magenta, purple, pink and red. The bougainvillea would like a little shade during the day, but it will be fine in full sun. 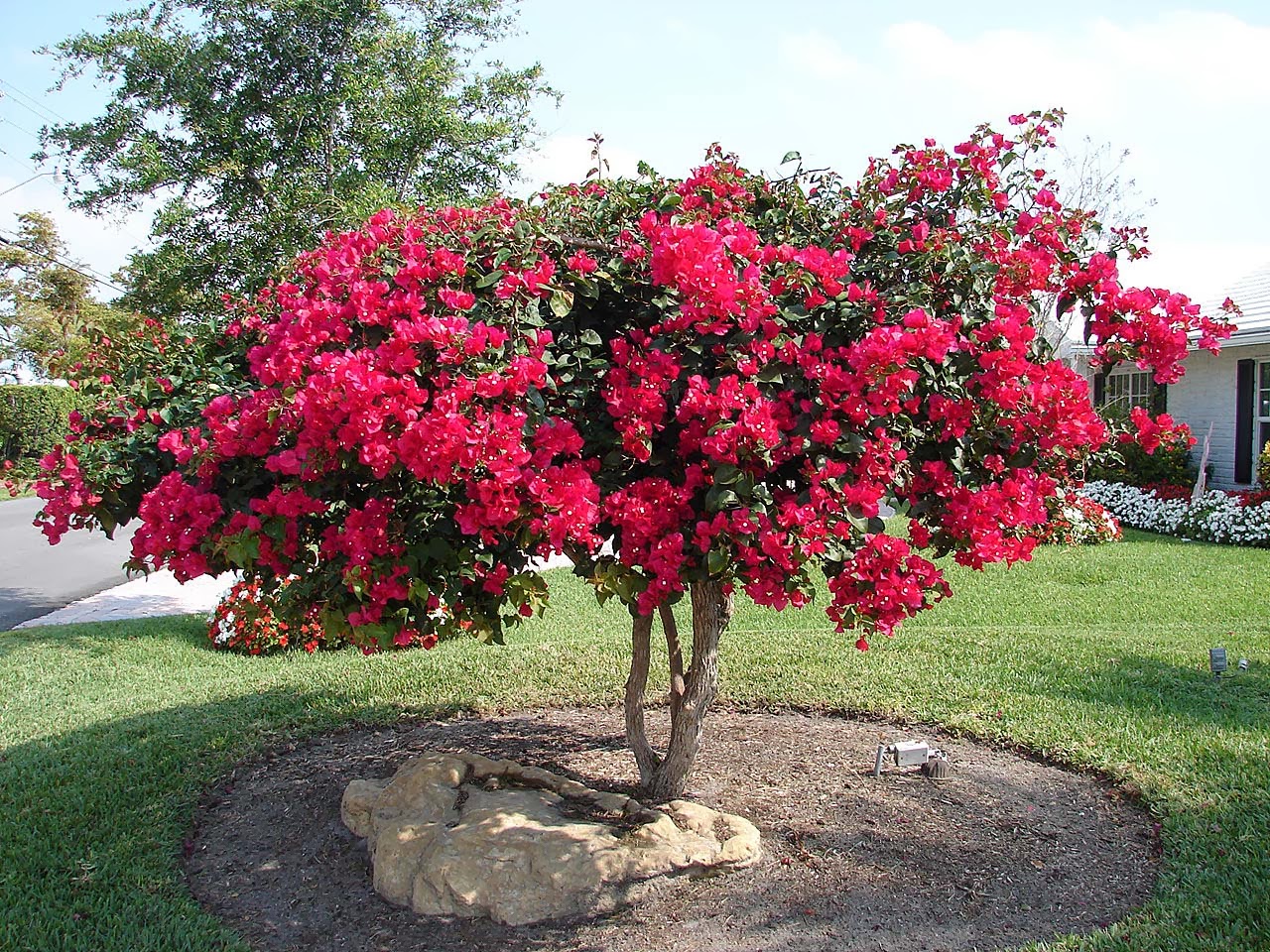 The growth rate of bougainvilleas varies from slow to rapid, depending on the variety. They tend to flower all year round in equatorial regions. 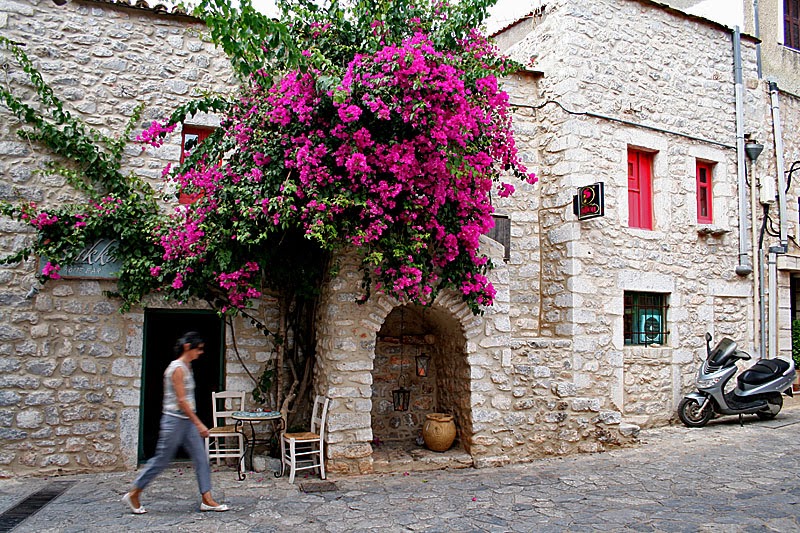 Elsewhere, they are seasonal, with bloom cycles typically four to six weeks. Bougainvilleas grow best in dry soil in very bright full sun and with frequent fertilization; but they require little water once established, and in fact will not flourish if over-watered. 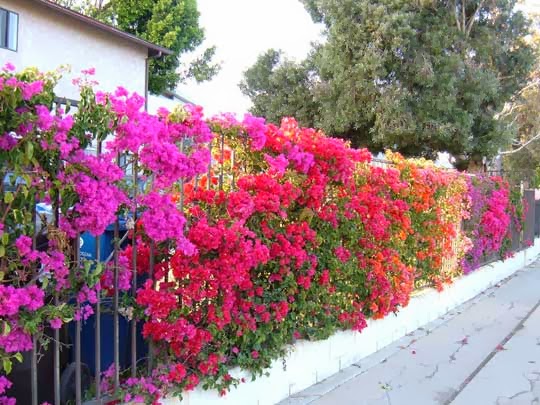 They can be easily propagated via tip cuttings.

Bougainvillea plants can be trained into various shapes. They can be used as vines, shaped into bushes, into ground cover, or just let to grow wild. Of all the desert plants I recommend, bougainvillea is the one that is most sensitive to frost, and there will be times during the winter when you should cover your bougainvillea with a light cloth or sheet. Even if the bougainvillea plant dies in the frost, it will probably come back after the winter if it is pruned, but it looks pretty ugly when it is frost damaged until that time.

Official flower of Cities and Regions 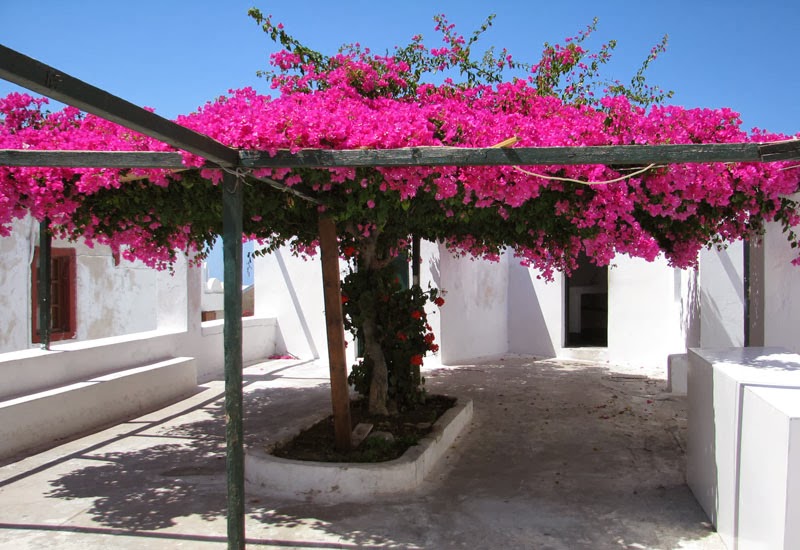 Various species of Bougainvillea are the official flowers of Guam (where it is known as the Puti Tai Nobiu); Lienchiang and Pingtung Counties in Taiwan; Ipoh, Malaysia; the cities of Tagbilaran, Philippines; Camarillo, California; Laguna Niguel, California; San Clemente, California; the cities of Shenzhen, Huizhou, Zhuhai, and Jiangmen in Guangdong Province, China; and Naha, Okinawa. 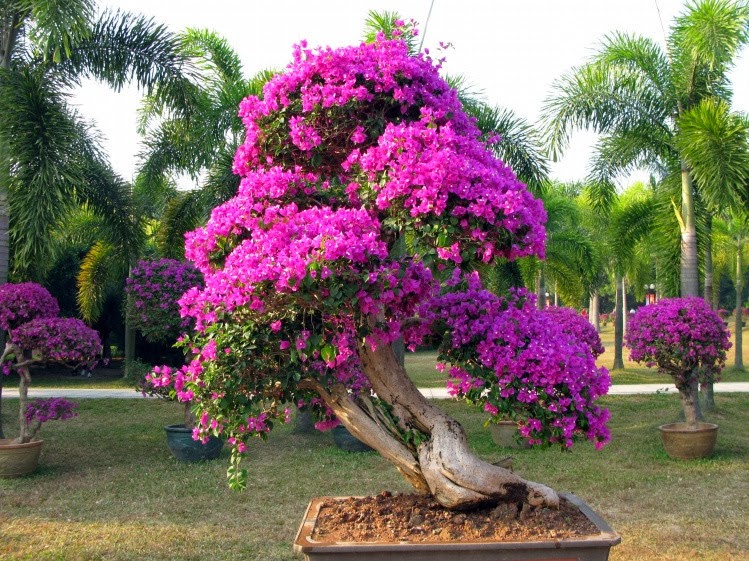 Bougainvillea are drought-tolerant, requiring infrequent watering once established. Bring the soil to visual dryness, and then water the soil thoroughly (avoid frequent, light watering since this will promote a weak and shallow root system). Do not let your Bougainvillea become too dry, as this will cause flowers and foliage to drop. 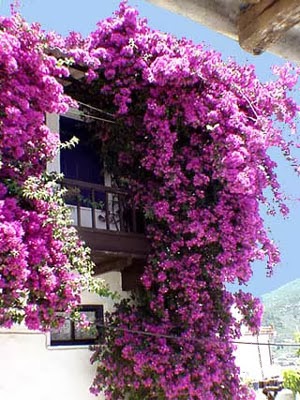 Bougainvillea grow best when given ample space in well-drained loamy soil (made up of equal parts sand, silt, and clay), mixed with organic matter that allows nutrients and oxygen to more easily reach the roots. When choosing an area to plant your Bougainvillea, remember to plant on higher ground and away from areas where flooding is likely. 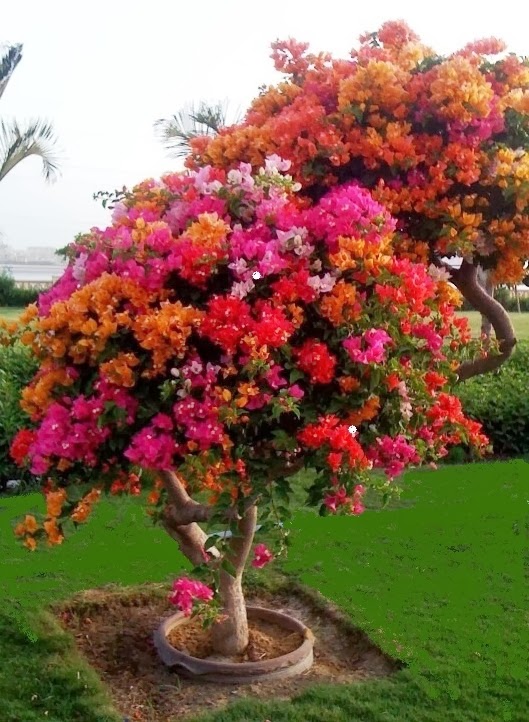 My Other environmental Blog http://lilianausvat.wordpress.com
My Books
My Other Websites
Posted by Liliana Usvat at 8:45 AM