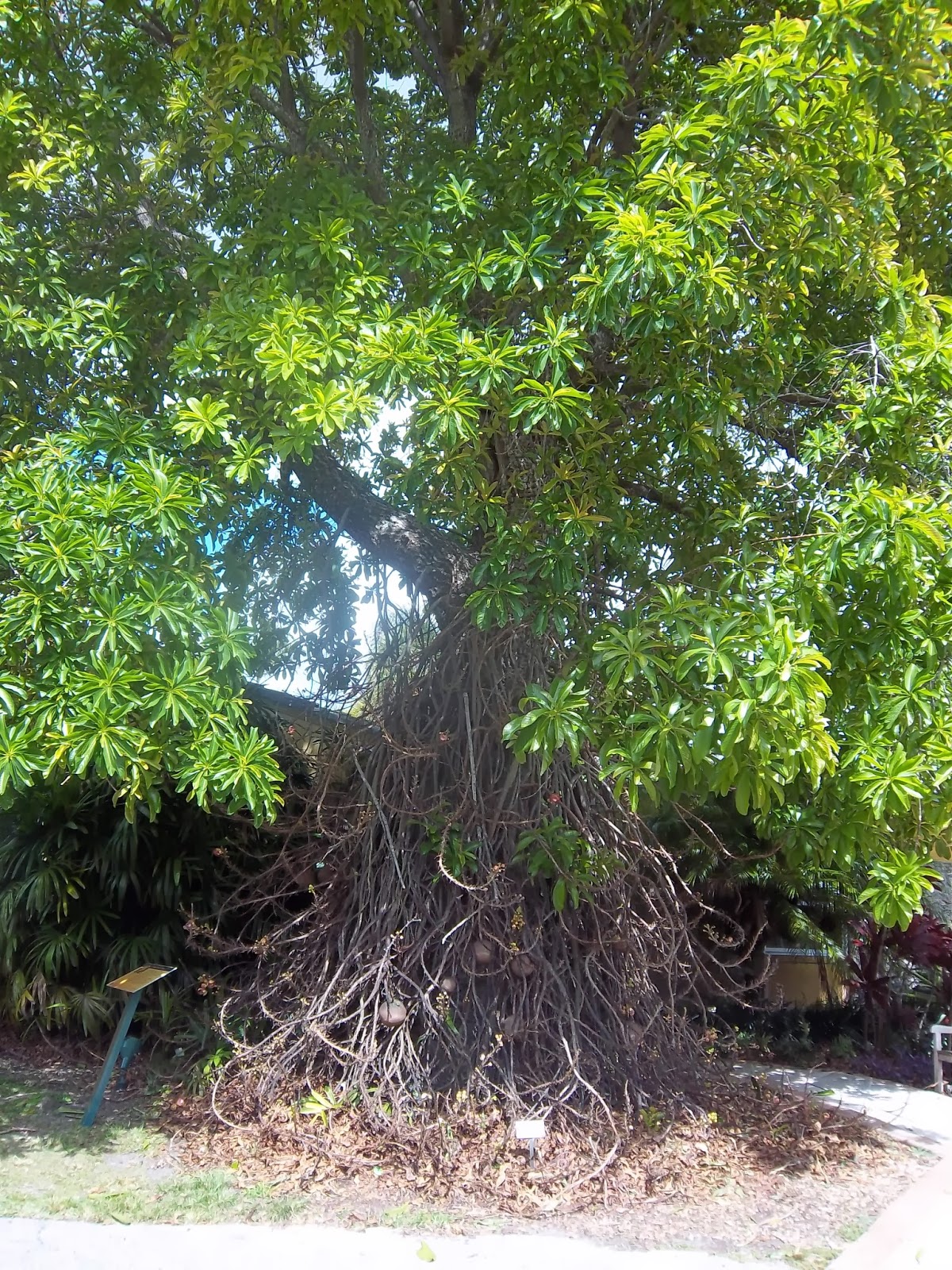 The cannon ball tree is one of the more spectacular South American trees to be planted in subtropical and tropical botanical gardens throughout the world. This magnifient tree can be seen in cultivation at the Fairchild Tropical Botanical Gardens in Coral Gables, Florida. The species was given the name Couroupita guianensis in 1775 by the French botanist J. F. Aublet and is a member of the Brazil nut family.  The tree is also called a “sala tree,” 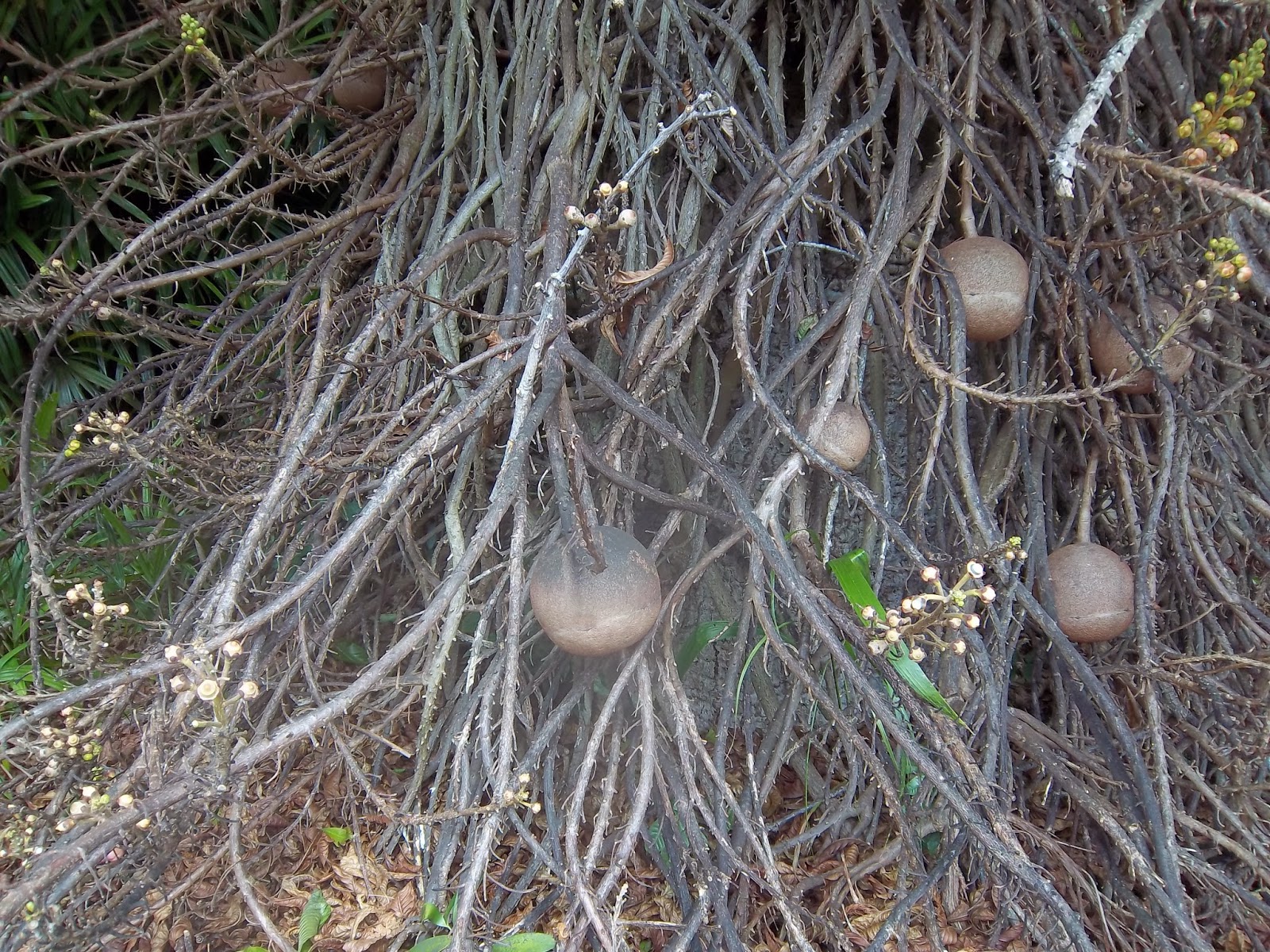 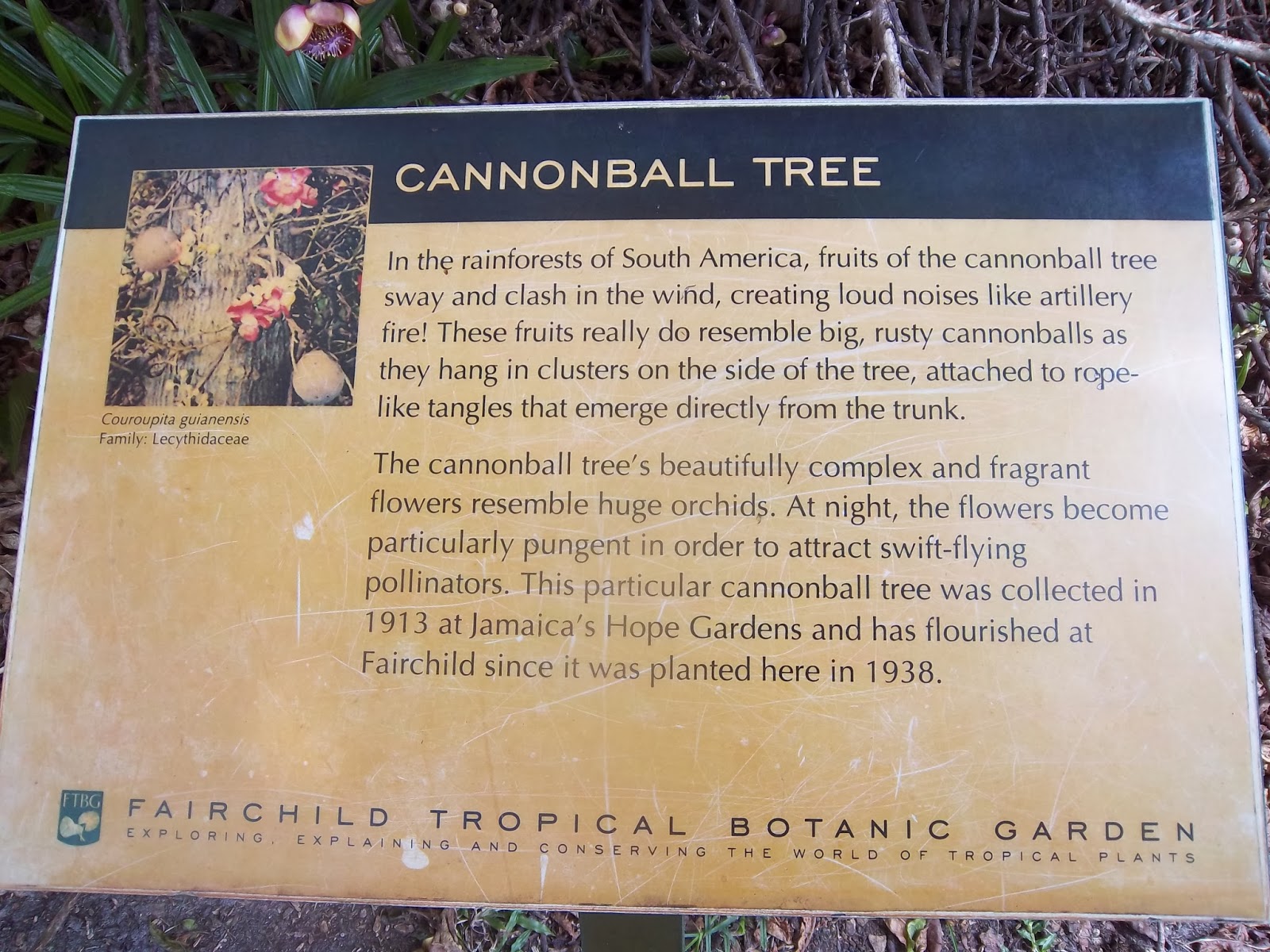 The large, sweetly fragrant flowers (and later the fruit) are borne directly from the trunk and main branches (cauliflory) in large clusters on woody stalks that can be a few metres long. The heavy fruits drop from the tree with great force and may crack open upon landing, revealing a foul smelling pulp with many seeds. Wild peccaries and other animals eat the pulp and disperse the seeds in their waste. 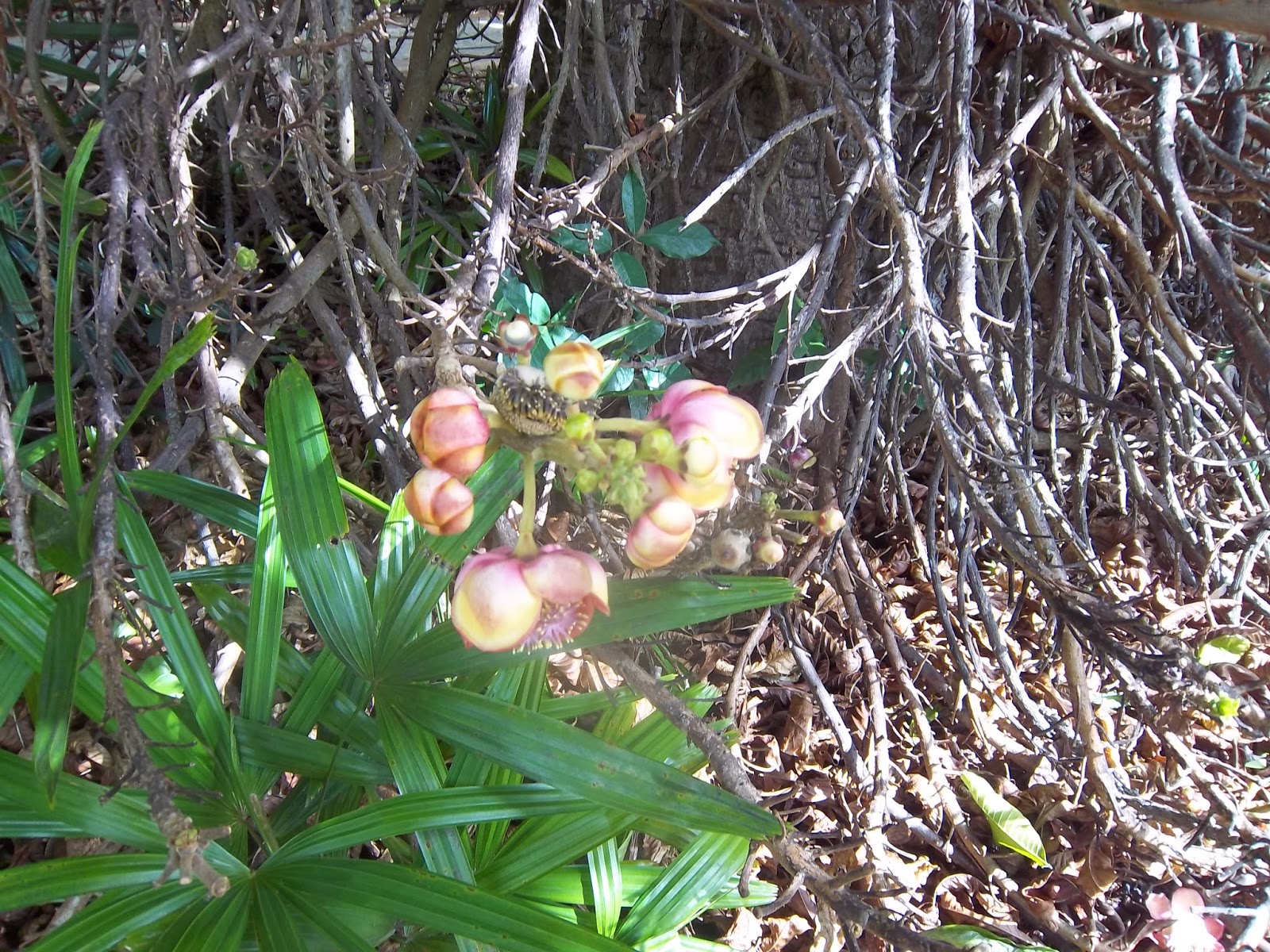 The tree at Fairchild Tropical Botanic Garden in Miami, FL, is self-incompatible. It requires cross -pollination from another tree (in past years, the tree at Montgomery Botanical Center was the daddy). The flowers are borne on long, woody, perennial branches that originate from the lower part of the trunk and hang down. The cold weather Miami is getting this week will cause the tree to completely defoliate within a couple of days, but new, replacement leaves will grow out within a couple of weeks.

Most fruits of this species in nature are probably the result of the movement of pollen from one tree to another, but experiments show that self-pollinated plants of the cannon ball tree also set fruit. 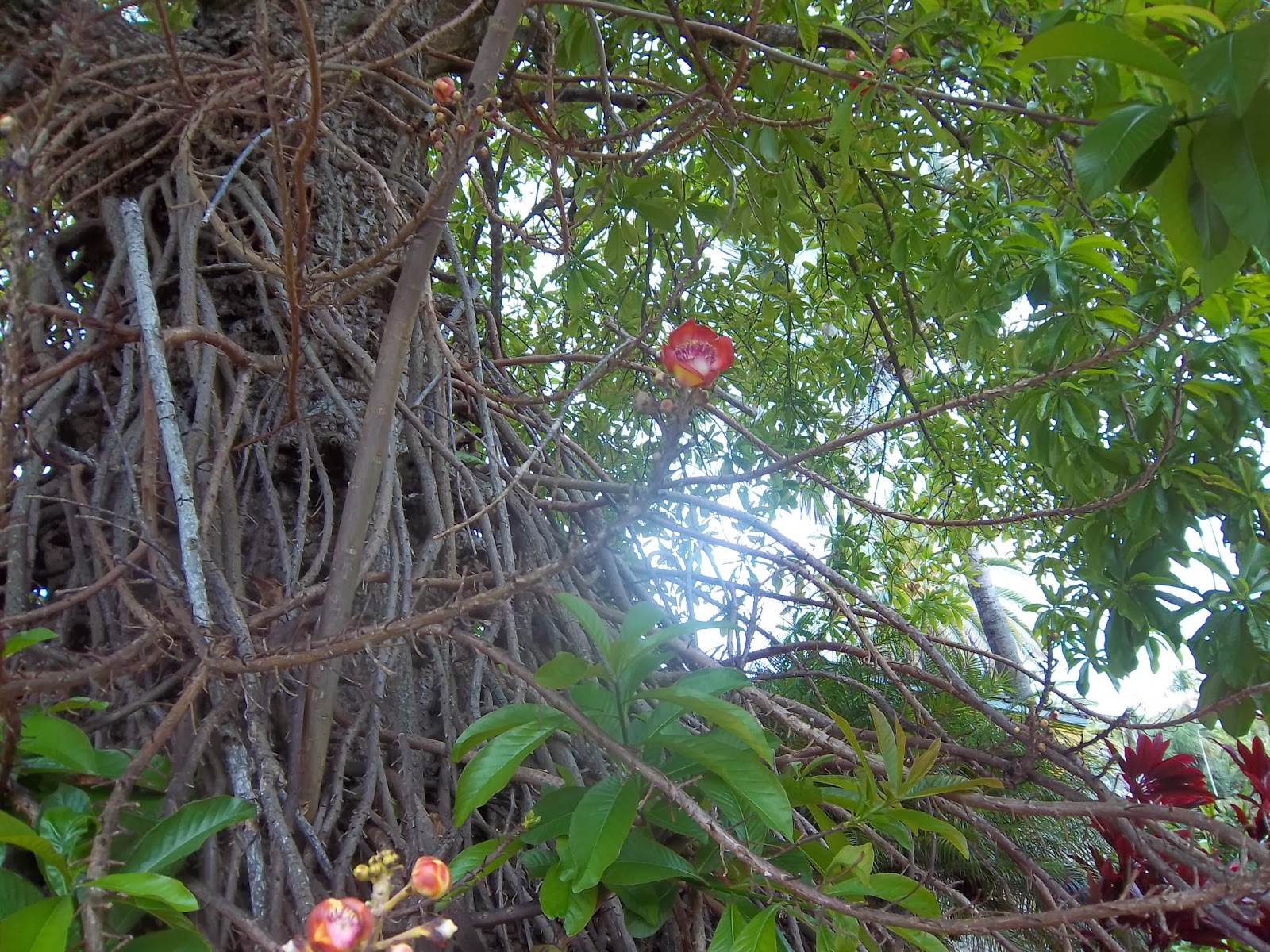 Observation of a tree under which the ground was covered by many fruits revealed that they remained untouched until a herd of peccaries passed by and broke open the fruits and consumed the pulp. Presumably the peccaries pass the seeds in their feces and some of the seeds germinate. The seeds of species of Couroupita have hairs on their seed coat which may protect them from digestive juices and facilitate their passage through the digestive tracts of animals. 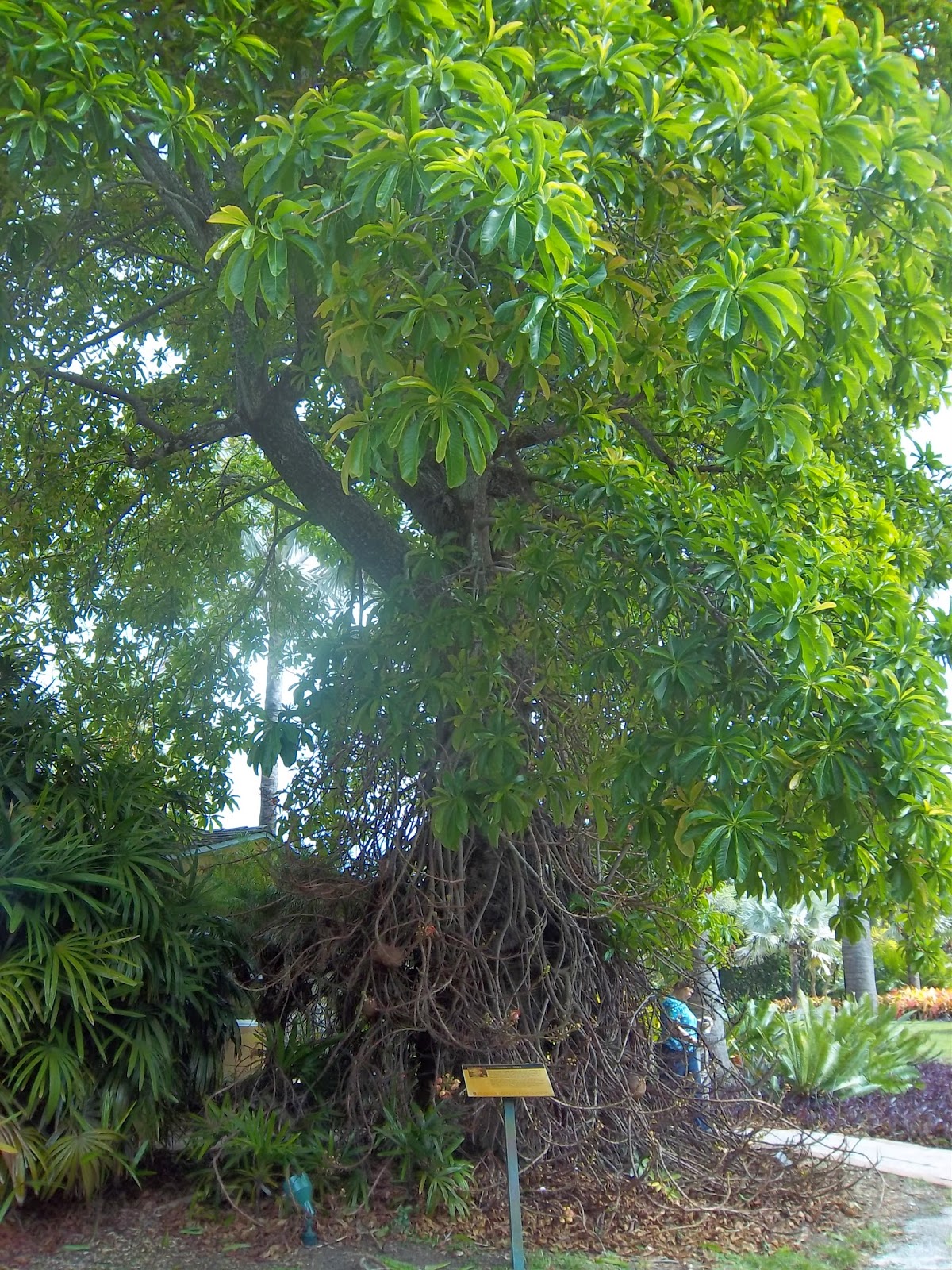 In the Amazon all parts of the tree are used medicinally by the shamans who also eat the fruit, although this is not recommended for ordinary mortals who probably have allergic reactions to it. 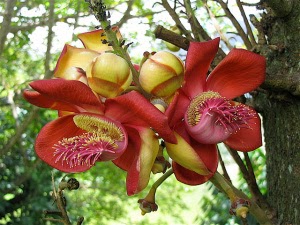 Each of these fruits, or cannonballs, contains up to 200 or 300 seeds apiece.  This tree is considered a maestro plant, as its spirit enjoys teaching and the plant itself has incredible medicinal properties. The spirit is typically male and works well with other power plants like ayahuasca. 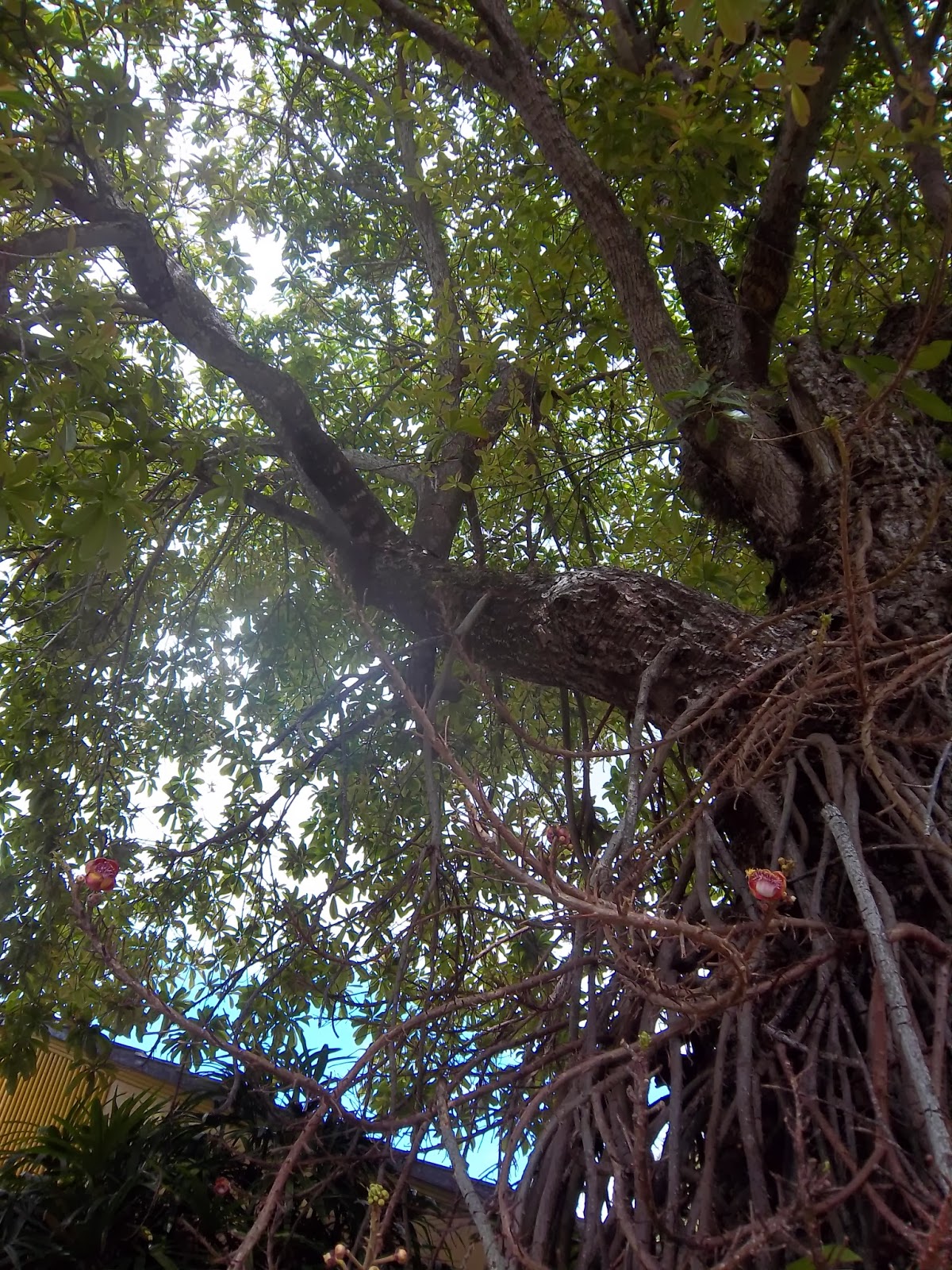 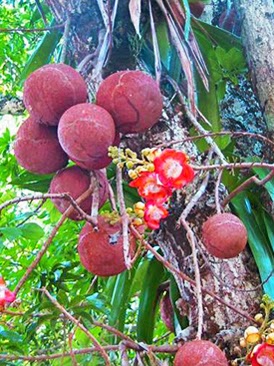 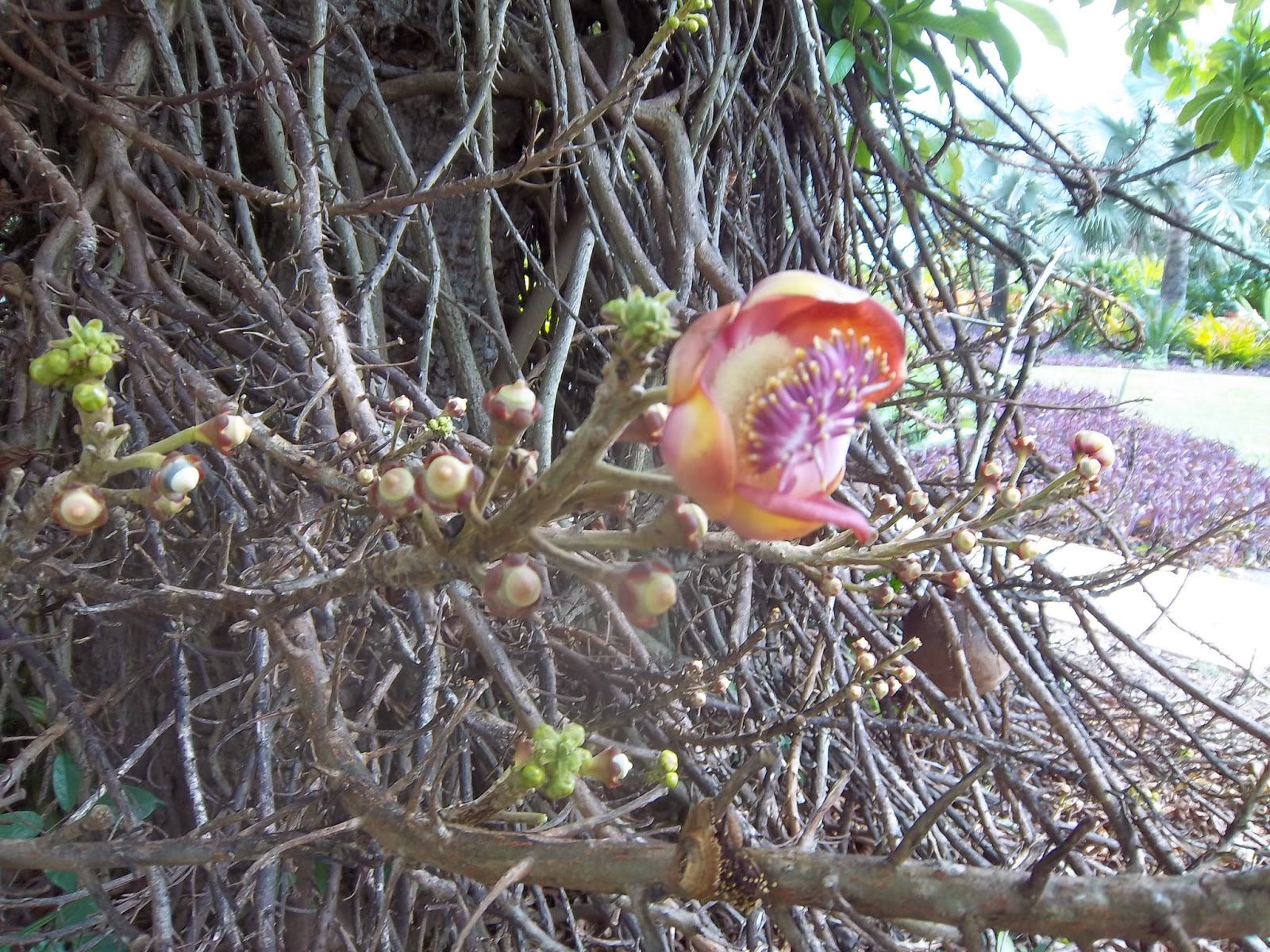 The cannonball tree is native to the tropical forests in the Amazon basin in northeastern South America and also the islands of the southern Caribbean. It has been used traditionally as an anti-microbial and anodyne. There is some controversy on its native status in India and Thailand. 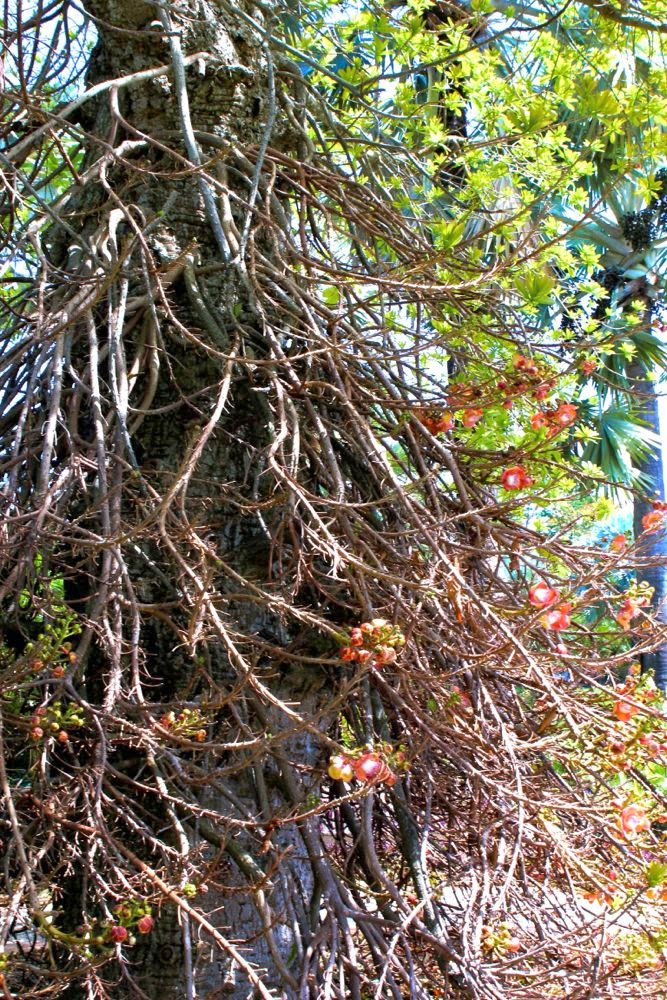 In India, the tree is revered, and planted near Shiva temples. It is called Shivalinga in Hindi, and Nagalingam in Tamil. Some proponents of pre-columbian transoceanic voyages cite fossil evidence and written historical records of Couroupita guianensis in Asia as proof of transcontinental trade.
Stories 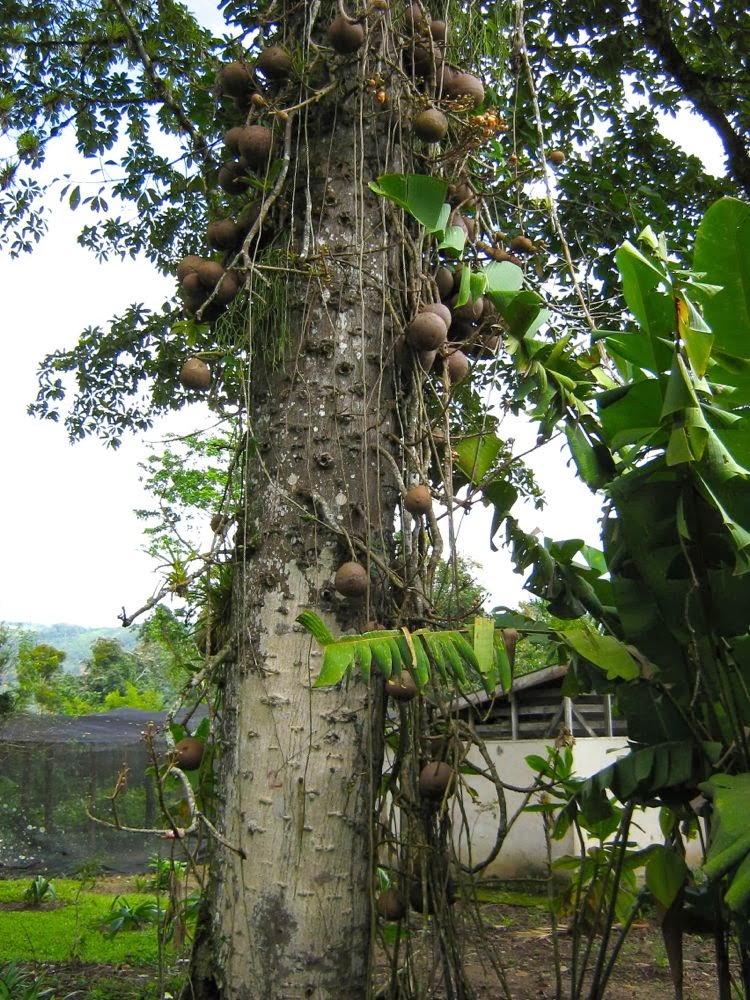 The cannonball fruit is thought to have been originally eaten and dispersed by giant ground sloths, which are now extinct. In modern times, peccaries have been observed eating the fruit. In the tropics, where the cannonball tree is planted for its beautiful and aromatic flowers, there are signs on the trees warning people to stay away from the base of the tree, as its heavy fruit falls to the ground randomly. 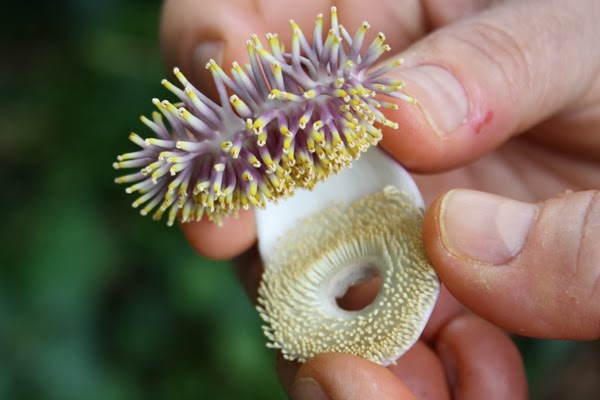 It is common for curanderos to diet with this powerful tree in order to strengthen their spirits and protect them from dark or negative entities.

The Cannonball tree is held in high regard by the shamans of the Amazon region.They call it “head of spirit” or Ayahuma. 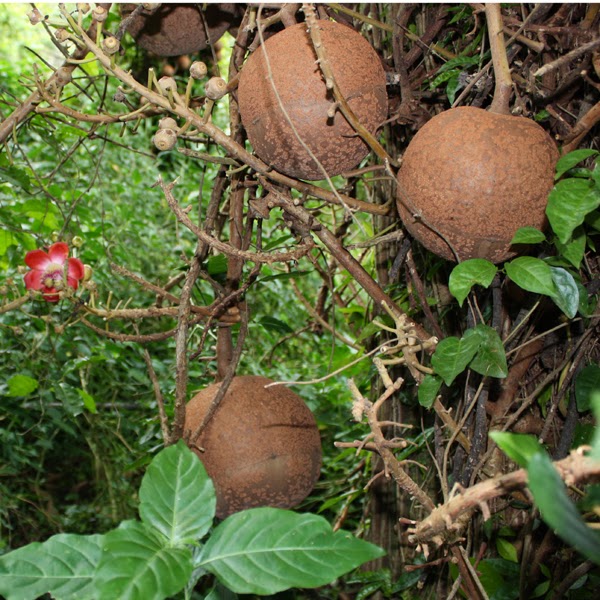 It is sacred to Hindus who call it Nagalingam, as it has what resembles the sacred serpent on the large Shiva lingam in the centre of the flower and there are other Shiva lingams around this.

In Buddhist countries the cannonball tree represents Enlightenment and is found in many temples (sometimes known as Bodhi tree) as it is very reminiscent of the Sala tree (Shorea Robusta species) under which Buddha is supposed to have died, or according to others, under which He was born. Very sacred, either way.
Posted by Liliana Usvat at 9:15 AM